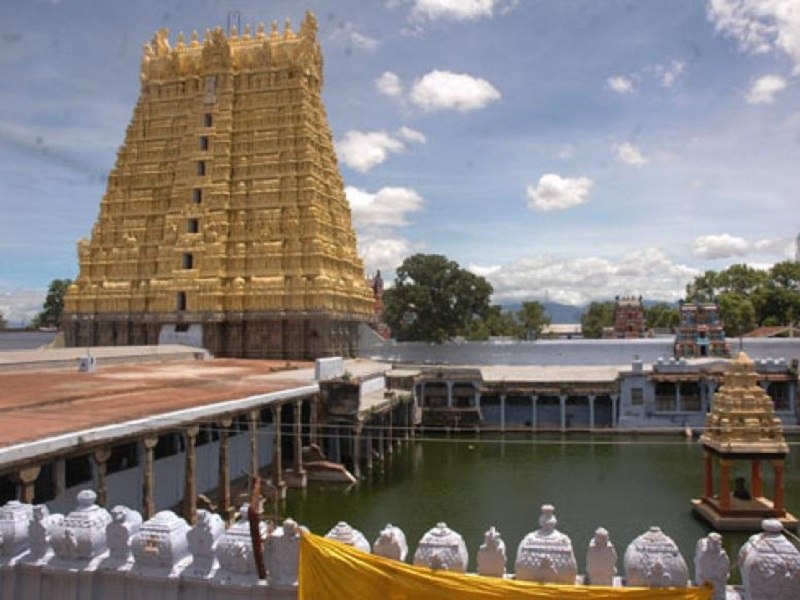 #14 of 23 Places to Visit in Tirunelveli

The temple is dedicated to Sankaranarayanar, who is the combined manifestation of Shiva and Vishnu. This temple was built by Ukkira Pandiya Thevar in the 11th century AD. This temple also called as Avudaiamman Kovil or Davasu Kovil. According to mythology, once the devotees of Lord Vishnu and Lord Shiva quarreled with each other to determine whose god is powerful. Then Lord Shiva appeared as Sankaranarayanar to mark his devotees to understand that both Hari and Shiva are one and the same. So it is held sacred by Saivites and Vaishnavites as well. Hence this temple depicts the concept of Hari and Haran being one God.

The temple of Sankaranarayana is situated on 4.5 acre site in the heart of the Sankarankovil Town. It is one of the Pancha Bootha Sthalas in the South Pandiya country. With an imposing Rajagopuram, rising to a height of 135 feet with nine tiers, this temple is surrounded by high walls and the tower has many beautiful images.

Lord Sri Sankaranarayana is the main deity in this temple. The right portion of the idol has sandal and indicates Lord Siva, with cobra around his neck & moon above his head. The left side of the idol indicates Lord Vishnu having Sankhu in his hand. The Sankaralingam enshrined in the temple was found during the unearthed from a 'puttru'(Ant Hill) and was consecrated as Sri Sankaralinga Swamy in the temple. During March and September months, the rays of Sun fall on Sankaralingam for three days from 21st of the respective months. The goddess of the temple is Arulmigu Gomathi Amman. Goddess Gomathi is said to have worshipped the Lord at this place. The temple also has a separate shrine for Lord Sarpa Vinayaka.

The ant-hill sand is offered as Prasad, people believe that is capable of curing all the diseases. Devotees facing problems due to the presence of poisonous creatures in their houses as lizards, scorpions and snakes offer silver pieces embossed with the images of such creatures for solution.

Aadi Thapasu in July-August, 10 day Brahmmotsavam in Panguni-Chithirai in April, Aipasi wedding festival in October-November and Thai float festival in January- February are the popular festivals celebrated in the temple.