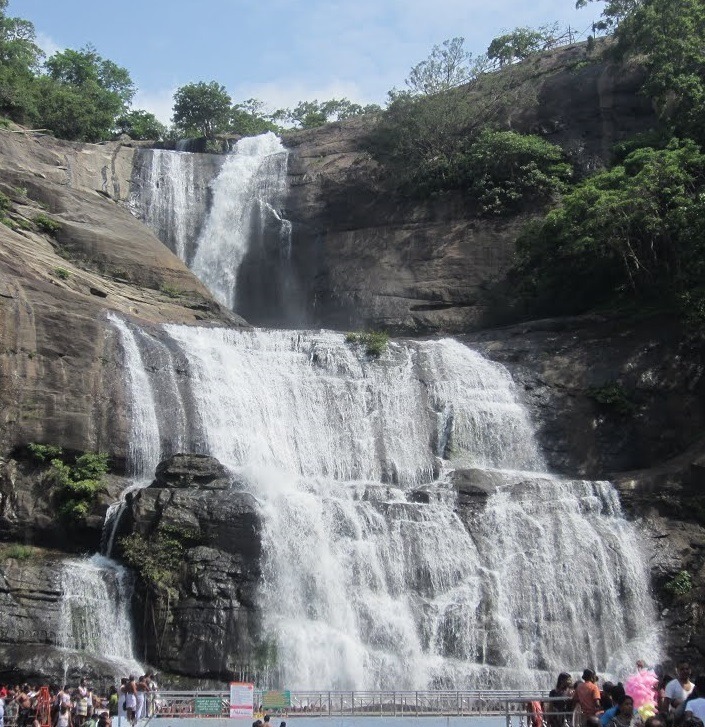 Travel Tips: Kutralanathar Temple is adjacent to Courtallam Falls and can be visited together.

Chitraruvi or Small falls is just above the Courtallam Main Falls.

All the above places are visited from Courtallam Main Falls

At a distance of 7 km from Tenkasi, 62 km from Tirunelveli & 160 km from Madurai, Courtallam, or Kutralam Falls is a stunning waterfall situated near Tirunelveli. It is one of the prominent waterfalls in Tamilnadu, and among the must include places in Tenkasi holiday packages. Courtallam is famed as the 'Spa of South'.

There are nine waterfalls at Courtallam where the River Chittar cascades over 92 meters at varying volumes. The Main falls or Peraruvi is the most popular and the biggest among the nine falls, at a distance of about 300 meters from Courtallam Bus Stand. Falling from a height of 60 m, it is located right inside Courtallam town. The flow of water is interrupted by the Pongumakadal rock and comes down gently making it a safe place to bathe. The waters of Courtallam are believed to have medicinal qualities as it flows through forests of herbs. The Kutralanathar Temple, dedicated to Lord Shiva is located near this falls.

Chitraruvi or Small falls is situated just above the Main falls, and is one of the famous Tenkasi tourist places. There are steps that provide easy access to the small falls. The size of the falls is comparatively small and the people who are scared of Peraruvi can literally enjoy Chitraruvi. Separate sections are present both for men and women to take bath. Chitraruvi leads to other waterfalls like Shenbagadevi falls and Thenaruvi.

Shenbagadevi Falls or Chembakkadevi Falls is situated above Chitraruvi falls / Small falls, at about 3 km from Main falls. Visitors have to trek through Chitraruvi forest for about 45-60 minutes to reach Shenbagadevi falls, where the water flows from a height of 40 feet. The waterfall is surrounded by Shenbaga trees. Entry to this waterfall is restricted during peak season due to flash floods and not safe for bathing. There is also a temple dedicated to Shenbagadevi Amman near the falls. During full moon days, numerous pilgrims visit this temple. Vendors sell the fragrant Shenbaga flowers on the way to the temple, which is an offering here.

Honey Falls or Thenaruvi is further 1 km from Shenbagadevi Falls and 4 km from the Main falls. It cascades down from a height of 40 m between two large stones. This is the first cascade in the series of Courtallam Falls and is considered the purest. It is named after the beehives that form on the face of the rock during the dry season. The picturesque horseshoe-shaped waterfall which falls vertically from three sides to join into a small lake is a wonderful sight. The waterfall is not easily accessible and is a risky trek. The trek will take almost 30 minutes from Main falls and people are not allowed to bathe in the falls as it is very dangerous. Entry to this waterfall is also restricted during peak season owing to flash floods.

July to October is the best time.