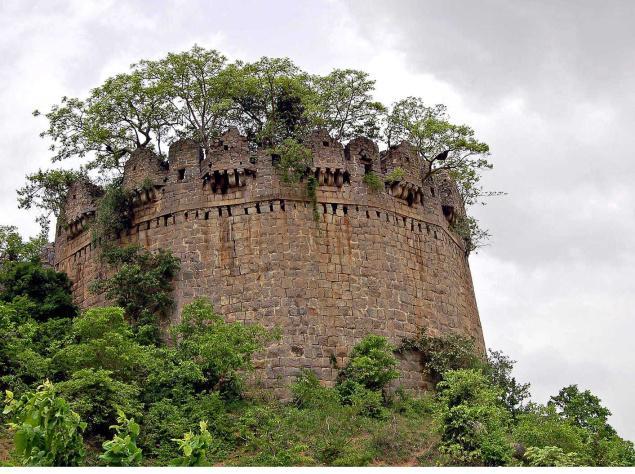 At a distance of 3 km from Koulas, 81 km from Nizamabad, 84 km from Medak and 169 km from Hyderabad, Koulas Fort is situated near Koulas village in Nizamabad district.

Koulas Fort is a massive fort dating back to the 14th century, spread across 6 sq km and located in Jukkal mandal close to Bidar - Nanded road. This fort was built by Kakatiya rulers. This fort was conquered by Muslim rulers Bahamanis, Qutb Shahis and later occupied by the Nizams.

The Koulas Fort was constructed in the semi-Dravidian style at an altitude of about 1100 ft. There is a stream that stands as a natural moat to the fort. The fort is spread across 400 acres surrounded by large fortification wall with strong bastions. The fort houses several wonderfully built gateways, buildings, temples, mosques and other structures. There are about 20 large cannons spread across the fort. It has 52 small and big bastions along several water tanks. The fort temple and dargah were declared as protected monuments by the Archaeology Department.

The Kasikund temple was constructed on the patterns of the Kasi temple. There are three other temples dedicated to Rama, Hanuman and Balaji. Behind the fort is the Ashtabuji Mata also known as Jagadamba Mata temple. The fort is currently not well maintained and the approach route is full of thorns. Also, the fort becomes inaccessible during monsoons when the water levels in stream reach the peak.

Visitors need to trek about 3 km to reach the Koulas Fort. It is advisable to take a villager as a guide from the Koulas village to visit the fort.

The Koulas dam is about 20 km away from the fort and attracts a large number of birds in winter.