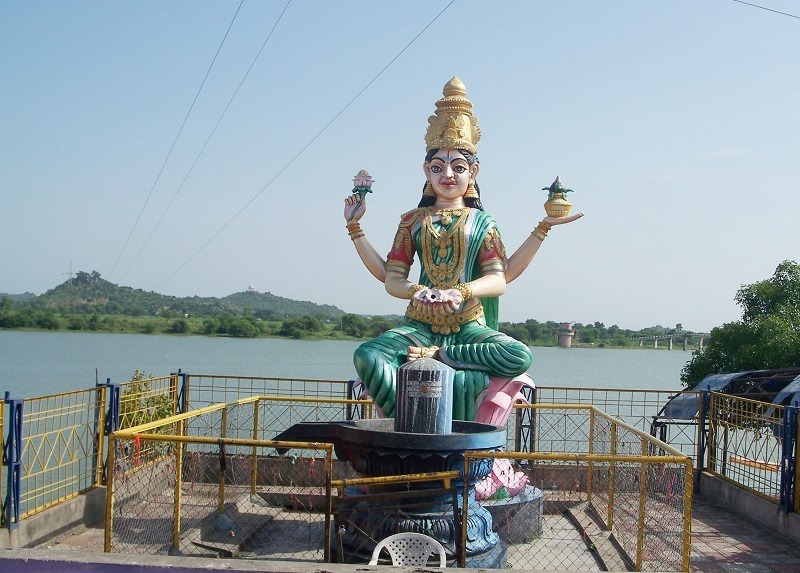 At a distance of 35 km from Nizamabad, 158 km from Adilabad and 212 km from Hyderabad, Basara is a popular pilgrimage site located in Adilabad district of Telangana. This is also one of the top Places to visit in Telangana.

Basar or Basara is situated on the banks of River Godavari. It is a popular tourist and pilgrimage site because of the famous Saraswathi temple. The Basara temple in is a unique temple of Goddess Saraswati, the Hindu Goddess of Knowledge and Learning. Children are brought here to do the learning ceremony called Akshara Abyasam. It is believed to be one of the two oldest temples of Goddess Saraswathi in India, the other being located in Kashmir. Basara is one of the top attractions you must include in Hyderabad packages.

According to mytholpgy, Maharishi Vyas, his disciples and sage Viswamitra decided to settle down in a cool and serene atmosphere after the Kurukshetra War. In the quest for a peaceful abode, he came to Dandaka forest and pleased with serenity of the region, selected this place. Since Maharishi Vyasa spent considerable time in prayers, the place was then called 'Vasara' and turned into Basara due to the influence of the Marathi language in the region.

It is also considered to be one among the three temples created near the holy confluence of the Manjira and Godavari Rivers by the Rashtrakutas. A Karnataka king by the name Bijialudu reportedly constructed this ancient temple at Basar.

The town is also home to a Rajiv Gandhi University of Knowledge and Technology offering engineering courses. It was established in the year 2008. The course offered is a six year integrated engineering course.

The best time to visit Basara is from October to March. Accommodation is available with several temple guest houses and private lodges.

How to Reach Basara

How to Reach Basara - Full Details

Top 10 Places to Visit in Basara

At a distance of 1 km from Basara Bus Station, Goddess Saraswathi Devi Temple (Basara Temple) is located on the left bank of river Godavari.

The temple is dedicated to Goddess Saraswati, the goddess of knowledge. The temple also houses the idols of Goddess Lakshmi and Kali. As per history, Bijialudu a Karnataka king, who ruled the province of Nandagiri with Nanded as his capital in the 6th century, constructed the temple at Basara.

According to the legend, Sage Veda Vyasa after the Kurukshetra war was searching for peace and reached Basara situated on the banks of River Godavari in Dandakaranya. He found this place very serene and so started meditating .....

At a distance of 1 km from Basara Bus Station, Vyasa Maharshi Cave is a cave situated on top of a hill next to the Basara Temple of Gnana Saraswathi Devi.

This cave has a narrow entrance and one has to wriggle through it to enter the small enclosure. Here one can see the marble idol of sage Veda Vyasa. Legend says that Veda Vyasa stayed here during his meditation.

It is believed that Maharshi Veda Vyasa, the author of Mahabharata and his disciples and sage Suka decided to rest in a calm and serene ambience after the Kurukshetra war. In the quest for a peaceful abode, he came to Dandaka forest and pleased with serenity of the region, selected this place. Since Maharishi Vyasa spent considerable time in prayers, the place was then called Vasara and turned into Basara.

The Manjeera river is merged into Godavari near Basara and the flow of water increases at this point. Several pilgrims take bath at the ghats before visiting the main temple. Boating is also available in Godavari River at the ghats.

There are several boats available throughout the day to ferry tourists and natives. Before the construction of new road bridge across Godavari near Basara, most of the people used to depend on boats to cross the river and the other side.

At a distance of 2 km from Basara Bus Station, 1 km from Saraswathi Tempple, Lord Shiva Temple is another important tourist attraction in Basara.

Dedicated to Lord Shiva, this temple is situated on the banks of Godavari River near Bathing Ghat. The nandi bull is situated in the temple mandapa. This is very ancient temple.

At a distance of 1 km from Jankampet Bus Stand, 9 km from Nizamabad Bus Station, 26 km from Basara and 183 km from Hyderabad, Ashok Sagar is located at Jankampet in Nizamabad District of Telangana.

The Jankampet Lake is converted into attractive beautiful lake called as 'Ashok Sagar'. This is situated on the route to the famous Saraswathi temple at Basar from Hyderabad. It is a huge reservoir with beautiful Rock garden, octagonal shaped restaurant, swinging bridge, boating facilities and children's park. The garden is spread over an area of two acres with beautiful flowers, landscape and attractive natural setting rock cuts. There is a fifteen feet marble statue of Goddesses Saraswati in the middle of the water. The lake is very scenic with a backdrop of hilly region.

At a distance of 2.5 km from Jankampet Bus Stand, 12 km from Nizamabad Bus Station, 27 km from Basara Bus Station and 186 km from Hyderabad, Sri Lakshmi Narasimha Swamy Temple is located at Jankampet in Nizamabad District of Telangana.

Sri Lakshmi Narasimha Swamy Temple is dedicated to Lord Narasimha an incarnation of Lord Vishnu. This Temple consists of a pillared hall and garbhagriha. This temple is famous for Astahmuki Puskharini on top of the hill, constructed in octagonal shape. The temple was built during the Rastrakuta times and renovated during the period of Western Chalukyas, Kakatiyas and later rulers.

At a distance of 3.5 km from Jankampet Bus Stand, 13 km from Nizamabad Bus Station, 28 km from Basara and 187 km from Hyderabad, Ali Sagar Dam is located near Jankampet village in Nizamabad district of Telangana.

Ali Sagar Reservoir is a popular picnic spot in the region of Nizamabad. It was constructed by Nizams of Hyderabad in 1931 and it is a lift irrigation project. The lift canal originates from the back waters of Pochampadu Dam.

There is a garden near the reservoir which was developed by the Nizams of Hyderabad. This garden is spread over a total land area of 33 acres and is popular for its fountains, tree house, deer park and a flower garden.

The Ali Sagar Deer Park is situated near the reservoir was established in 1985 and hosts many species of deer. This park serves as a good picnic spot especially for kids. The area is spread amid natural hillocks and colourful flower gardens. The lake and its awe inspiring surroundings .....