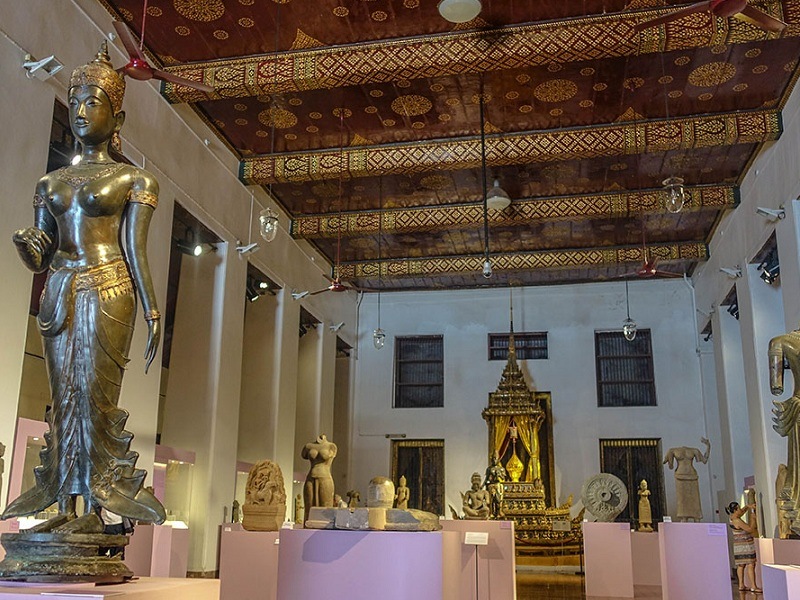 At a distance of 1.5 km from Grand Palace and 33 km from Suvarnabhumi Airport, Bangkok National Museum is a museum situated in Bangkok. It is one of the most popular museums in Bangkok and among the must include places in Bangkok Tour Packages.

Situated on the former grounds of Wang Na Palace near Grand Palace, the Bangkok National Museum is the main branch museum of the National Museums in Thailand and also one of the largest museums in Southeast Asia. It features exhibits of Thai art and history. The museum was originally established by King Rama V to exhibit the private collection of his father King Rama IV in 1874 at the Concordia Pavilion inside the Grand Palace. In 1887, the museum was shifted to the front palace, and called it 'Wang Na Museum' or front palace museum. Later, it was named the Bangkok Museum in 1926, and subsequently developed into the Bangkok National Museum, when it came under the direction of the Department of Fine Arts in 1934.

The National Museum Bangkok currently houses three permanent exhibition galleries include Thai History Gallery, Archaeological and Art History Gallery and the Decorative Arts and Ethnological Gallery. Located in the front of the Siwamokhaphiman Hall, the Thai History Gallery displays the King Ram Khamhaeng Inscription, which was inscribed on UNESCO's Memory of the World Programme Register in 2003 along with the exhibitions about Thai history since the prehistory period until the Bangkok period including the historical facts and the ancient things. The Archaeological and Art History collection showcases items from Thailand's prehistory to Sukhothai and Ayutthaya eras right through to the modern Thai Kingdom, including many ancient sculptures.

The National Museum Volunteers offer foreign language tours of the museum. All tours begin at 9.30 AM on Wednesdays and Thursdays only. Tours are held in English, German, French and Japanese.

Timings: 9 AM - 4 PM from Wednesday to Sunday