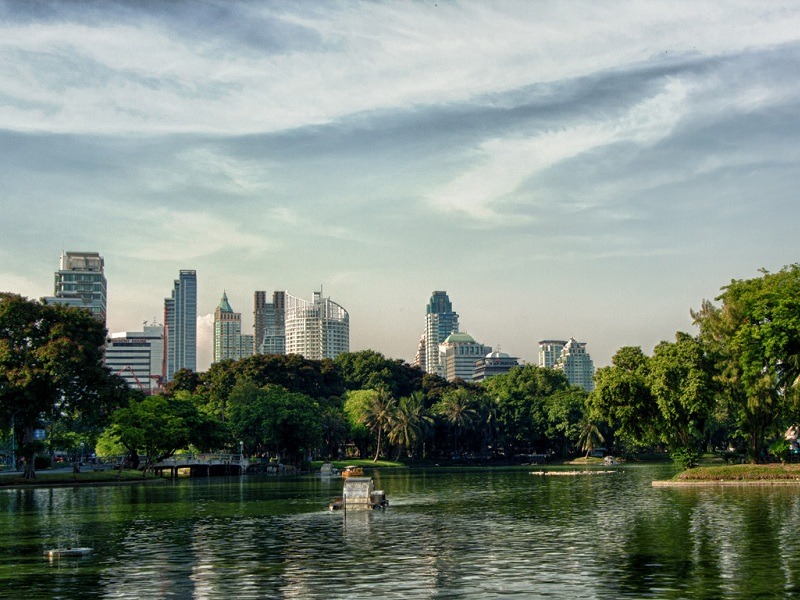 Travel Tips: There is a smoking ban throughout the park. Dogs are not allowed.

At a distance of 3 km from Chinatown and 32 km from Suvarnabhumi Airport, Lumpini is a public park in Bangkok, Thailand. It is the largest park in Bangkok and among the best Bangkok Tourist Places.

Named after the birthplace of the Lord Buddha in Nepal, Lumpini Park is covering an area of about 142 acres of land in the heart of the main business district. According to the history, it was created in the 1920's by King Rama VI on royal property in order to set to be an exhibition center for Thai crafts and flower displays. After the First World War, the site was renovated into the first park in Bangkok and was used as a camp by Japanese Army during the World War II.

Although this original vision was never fulfilled, Lumpini Park has over the years grown into an ideal place for basking in the bliss of tranquility, fresh breeze, and nature's shade. Lumpini is an entirely man-made park consisting of extensive lawns and a large boating lake where visitors can rent boats. It is also an endearing center for outdoor leisure activities for Bangkokians, who would convene before and after sunset to enjoy a round of jog, light workout, aerobics and a host of other recreational activities. Besides, this park is famed for monitor lizards. The water monitor is seriously big, yet seemingly quite harmless. Adults up to two meters long are easily seen basking in the sun by the edge of the lake.

A quite imposing statue of King Rama stands at the southern entrance of the park which was erected in 1941. There are a few ornamental gazebos and pavilions and similar architecture in Thai or Chinese style which are quite attractive, and also offer some shade from the mid-day sun. There is also a public library, a few other community buildings including Lumpini Hall, a cultural center, a clock tower and several administrative buildings. During winter, the Palm Garden of Lumpini Park becomes the site for the annual Concert featuring classical music by the Bangkok Symphony Orchestra and other bands.