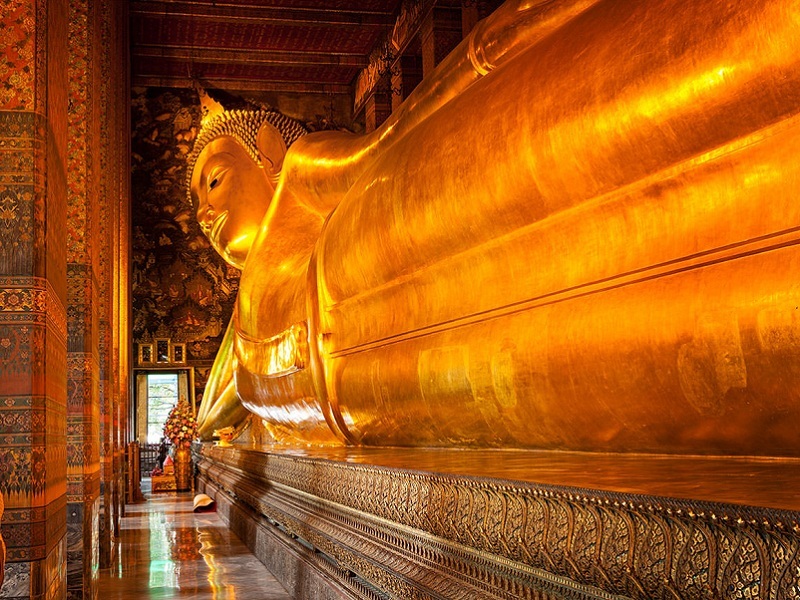 Place Location: To The South Of The Grand Palace

At a distance of 500 m from Grand Palace and 36 km from Suvarnabhumi Airport, Wat Pho or Wat Phra Chetuphon Vimolmangklararm Rajwaramahaviharn is a Buddhist temple complex in the Phra Nakhon district of Bangkok in Thailand. Situated to the south of the Grand Palace, it is one of the oldest temples in Bangkok and among the top places to visit in Bangkok as part of Bangkok Tour Packages.

Also known as the Temple of the Reclining Buddha, Wat Pho was believed to be founded during the 16th century. King Rama I was rebuilt the temple complex on the site of older one, and became his main temple where some of his ashes are enshrined. Later, it was expanded and extensively renovated by Rama III. It is considered as one of the oldest and largest temple complexes in Bangkok and also placed first on the list of six first class royal temples in Thailand.

Wat Pho is famed for its giant reclining Buddha that measures 46 m long and is covered in gold leaf. The Buddha's feet are 5 m long and exquisitely decorated in mother-of-pearl illustrations of auspicious 'laksanas' or characteristics of the Buddha. 108 is a significant number, referring to the 108 positive actions and symbols that helped lead Buddha to perfection.

In addition, the temple complex also houses 400 Buddha images, a colourful Chinese pavilion and a traditional Thai massage school. Most of the images were brought over from abandoned temples in places as Ayutthaya and Sukhothai by order of King Rama I. The temple is considered the earliest center for public education in Thailand, and the marble illustrations and inscriptions placed in the temple has been recognized by UNESCO in its Memory of the World Programme. It also houses a school of Thai medicine, and is also known as the birthplace of traditional Thai massage which is still taught and practiced at the temple.

Entry Fee: Free for Thais & 100 Baht per Person for Foreigners