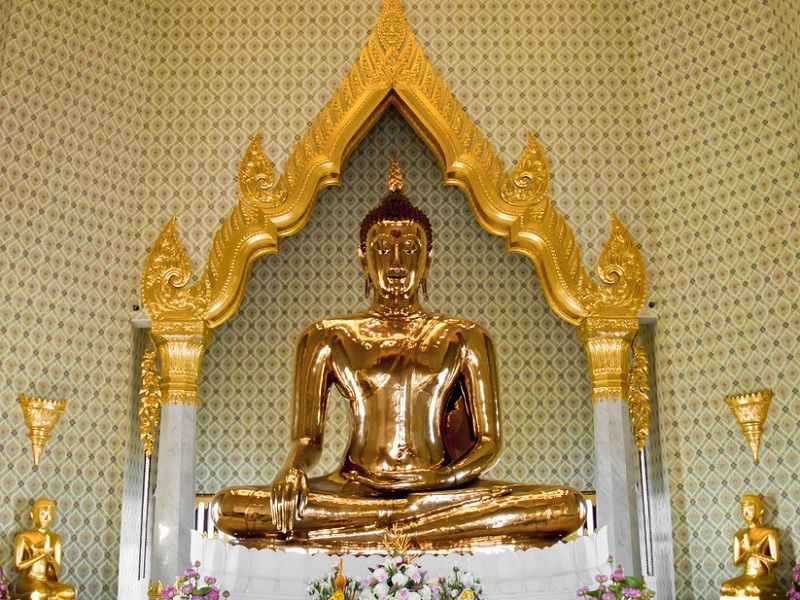 At a distance of 3 km from Grand Palace and 34 km from Suvarnabhumi Airport, Wat Traimit or the Temple of Golden Buddha is a well-known Buddhist temple in Bangkok. Located at the end of Chinatown's Yaowarat Road, it is one of the most noteworthy temples in the city of Bangkok and also one of the must include places in Bangkok Tour Packages.

Wat Traimit houses the world's largest massive gold seated Buddha image. This Sukhothai style statue is about five meters in height and weighing five and a half tons. There is a quite interesting story behind the statue. After the capital of Thailand was moved from Ayutthaya to Bangkok by King Rama I, this statue, then covered in stucco and plaster, was also moved. In 1955, a new building was created to house this statue and while it was being shifted to its new location, it fell off the crane. The people responsible for shifting this statue feared and fled without taking it back. The overnight rains washed off some of the plaster, revealing the original golden statue, which was discovered by local monks in the morning. Before that, the identity of this statue was undiscovered and unknown.

The awe-inspiring, gleaming statue of Buddha is housed in a 3 storey building named Phra Maha Mondop. The first floor contains a museum, the Chinatown Heritage center and the second floor contains an exhibition on the history of the Golden Buddha while the top floor of the Phra Maha Mondop contains the Golden Buddha image. The Buddha statue inside the temple is represented in the traditional pose of Bhumisparsha Mudra that is touching the earth with the right hand to witness Shakyamuni Buddha's enlightenment at Bodh Gaya.