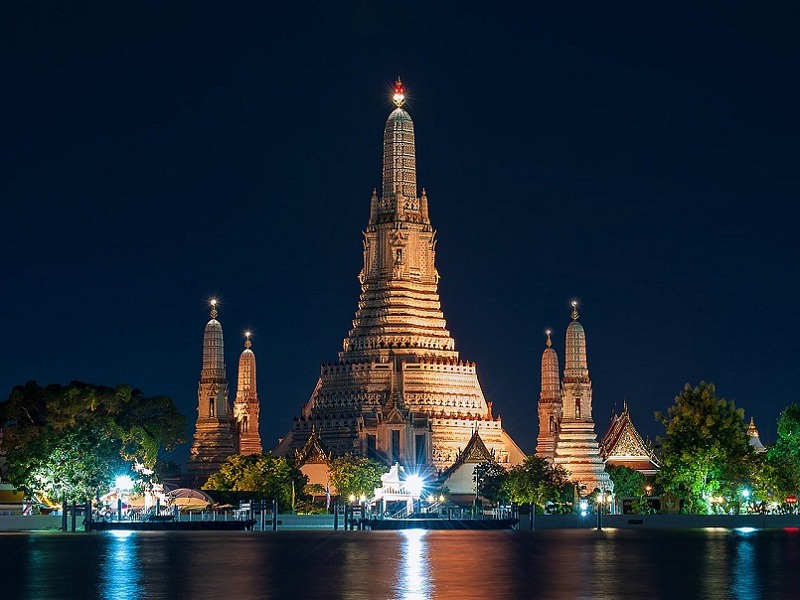 Place Location: Opposite To The Grand Palace

At a distance of 3 km from Grand Palace and 35 km from Suvarnabhumi Airport, Wat Arun is a Buddhist temple located on the west bank of Chao Phraya River in Bangkok. Situated opposite to the Grand Palace, Wat Arun is one of the stunning temples in Bangkok and among the must include places in Bangkok Tour Packages.

Locally known as Wat Chaeng, Wat Arun majestically stands at 70 m tall on Thonburi side of Chao Phraya River. It is considered as one of the best known landmarks in Thailand and among the most visually stunning structures in Bangkok. Popularly called as the Temple of the Dawn, the temple derives its name from the Hindu god Aruna, often symbolized as the radiations of the rising sun. The first light of the morning reflects off the surface of the temple with pearly iridescence.

Standing majestically over the water, this Buddhist Temple is believed to have been existed before 1656 CE. Since the time of the Ayutthaya Kingdom, a Buddhist temple has occupied the place Wat Arun is situated at, and it was restored by King Taksin in 1768 CE. It used to be the home of the Emerald Buddha until 1785 CE after which it was moved to its current shrine at Wat Phra Kaew. Later, the temple was restored and extended the pagoda to its current length of 70 m by King Rama II. It was also Rama III who added the decoration of the spires with porcelain, so that they glimmer in the sunshine.

The main feature of Wat Arun is its central prang which is built in Khmer architectural style and is surrounded by four smaller prangs. These five towers are beautifully decorated with vibrant porcelain and colorful ceramic tiles. The central prang is topped with a seven-pronged trident, referred to by many sources as the 'Trident of Shiva'. The base of the grand prang is also adorned with sculptures of Chinese soldiers and animals. The temple is an architectural representation of Mount Meru, the center of the universe in Buddhist cosmology.

It is possible to climb the spire, and although the task is difficult but the view at the top is worth it. One can see the Chao Phraya River all the way till it winds down, the Grand Palace and Wat Pho. Despite its name, this magnificent temple looks more stunning during sunset as well as in the night when it lit up. With its location on the Chao Phraya River's western bank, Wat Arun is best enjoyed from a canal cruise.

Entry Fee: Free for Thais & 20 Baht per Person for Foreigners