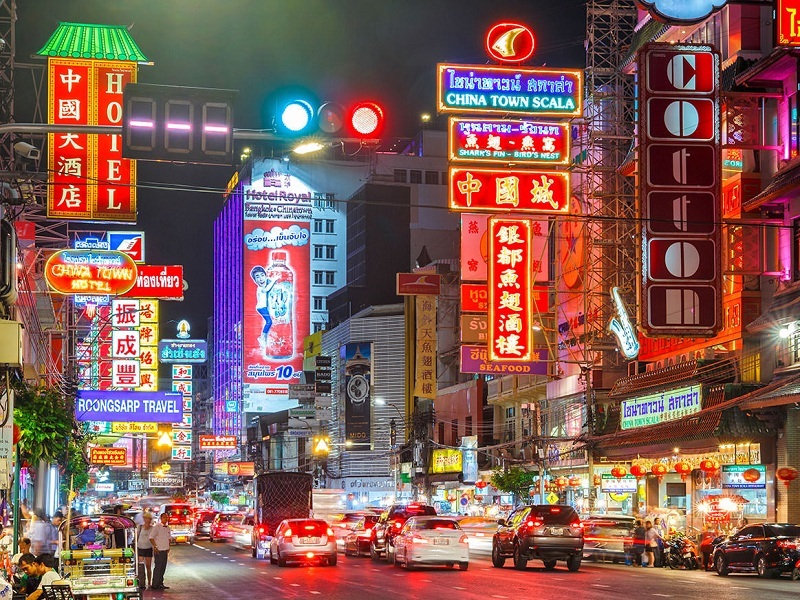 At a distance of 3 km from Grand Palace and 34 km from Suvarnabhumi Airport, Chinatown is a bustling locality in Bangkok, the capital city of Thailand. It is the largest Chinatowns in the world and among the must visit Bangkok Tourist Places as part of Thailand Packages.

Centered around Yaowarat road, Chinatown in Bangkok is a bustling place of narrow streets, busy markets, Chinese temples and bright lights. It was founded in 1782 when the city of Bangkok was established as the capital of the Rattanakosin Kingdom, and served as the home of the mainly Teochew immigrant Chinese population. It become a commercial hub during the 19th century but has declined in prominence since early 20th century as commercial activity moved elsewhere following the city's expansion. It now serves as a hub of Chinese culture, with numerous shops selling traditional goods.

Bangkok's Chinatown is a heaven for foodies who flock here after sunset to explore the vibrant street-side cuisine. During day time, it is no less busy as hordes of shoppers descend upon this 1km strip and adjacent Charoenkrung Road to get a day's worth of staple, trade gold, or pays a visit to one of the Chinese temples. Wat Traimit, Wat Mangkon Kamalawat, Yaowarat Road, Sampang Lane, China Gate, Wat Mangkol Kamalawat, Romaneenart Park and Wat Chakawat Ratchawat are the top attractions in Bangkok's Chinatown. Packed with market stalls, street-side restaurants and a dense concentration of gold shops, Chinatown is an experience not to miss especially during major festivals, like Chinese New Year.