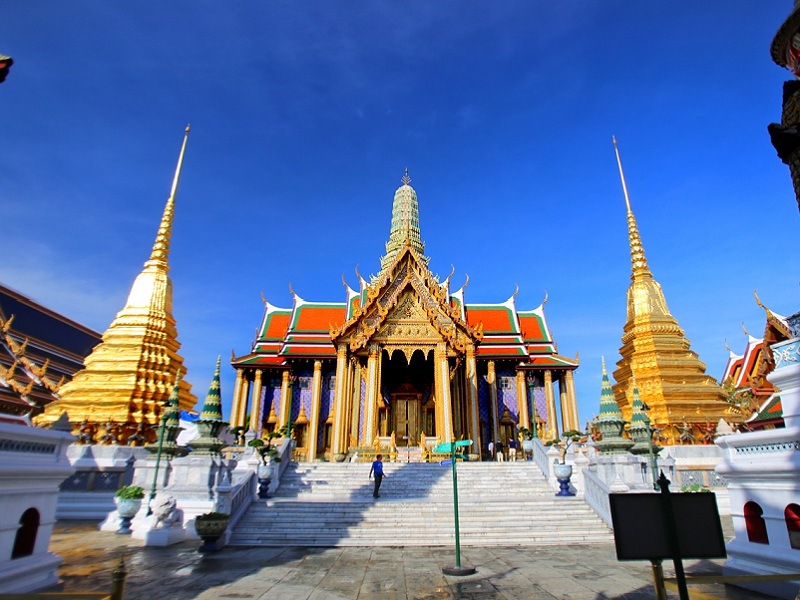 At a distance of 34 km from Suvarnabhumi Airport, Wat Phra Kaew or the Temple of the Emerald Buddha is a prominent Buddhist Temple in Bangkok. Situated inside the Grand Palace Complex, it is the most sacred Buddhist Temples in Thailand and among the top places to visit in Bangkok.

Commonly known as Wat Phra Sri Rattana Satsadaram in Thai, Wat Phra Kaew was established by King Rama I in 1782 while starting the construction of Grand Palace as it is a tradition in Thailand to build a Buddhist temple in the precincts of the royal palace. The temple enshrines the highly revered Emerald Buddha image in meditating posture in the style of the Lanna School of the northern Thailand. Only the Thai King and Prince are allowed to touch the Emerald Buddha.

The Emerald Buddha housed in the temple is about 66 cm tall and is considered to be the protector of Thailand. There are three different costumes of the Emerald Buddha, one of each season. The summer and winter costumes were made in the reign of King Rama I while the last one for winter was made in the reign King Rama III, all made of gold and precious stones. The ceremony of changing the costume of the Emerald Buddha takes place three times a year, at the beginning of new season by the King and is an important ritual performed here to bring good fortune to the country during each season.

The walls of the temple are covered with mural paintings. The mural painting on the wall behind the Emerald Buddha represented the scene of Buddhist cosmology, whereas the front shown the scene of the enlightenment of the Lord Buddha. The temple complex does not house any monks, unlike most of the other temples and it is more of a personal chapel for the Royal family. There is also a model of the Cambodian shrine Angkor Wat in the complex, which was commissioned by King Rama IV. The Rattanakosin style of architecture is evident in all of the buildings within the complex, which also includes a huge Pantheon and a bell tower.