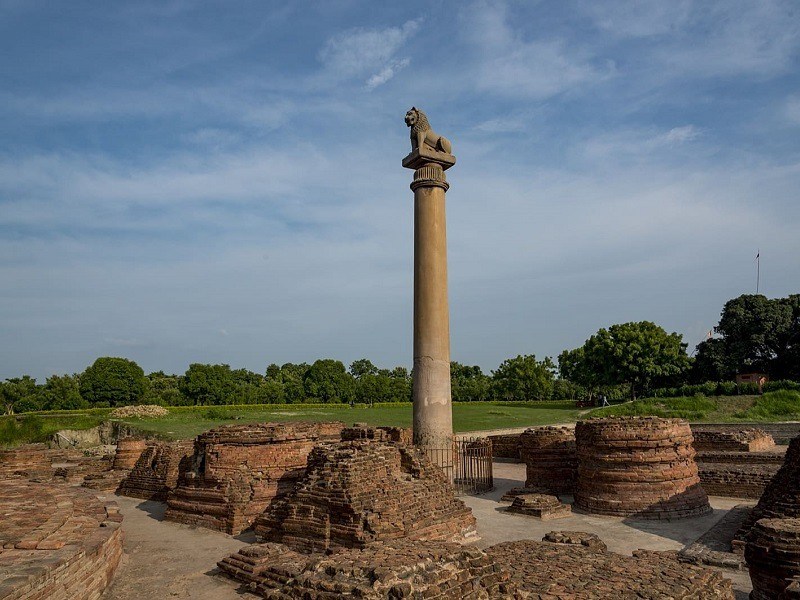 At a distance of 5 km from Basarh Bus Station, Ashoka Pillar is a historical monument located at Kolhua in Vaishali, Bihar. Situated inside the Vaishali Archaeological Ruins complex, it is one of the popular places of heritage in Bihar, and among the must include places in Vaishali Tour Packages.

Also called as the Lion Pillar, the Ashoka Pillar at Vaishali was erected by King Ashoka in 3rd century BC after being victorious on Kalinga. Influenced by Greco Buddhist style, this 18.3 m high pillar is made of a highly polished single piece of red sandstone, surmounted by a bell-shaped capital. A life-size figure of a lion is placed on top of the pillar facing north, believed to be the direction of Lord Buddha's last voyage. Generally, the pillars bear inscriptions by King Ashoka, but the one in Vaishali does not contain any such inscriptions. Unlike other Ashokan Pillars, the pillar at Vaishali bears only one old lion carved in a seated position a the top that signifies the end of the warrior inside King Ashoka and his new beginning as a Buddhist.

Identified by Alexander Cunningham, the pillar holds great significance for Buddhists as it is the place where Lord Buddha gave his last sermon and announcement of his approaching nirvana. The pillar is preserved with utmost perfection and is still intact. There is a small tank called Ramkund situated within the premises. Nearby are the skeletal remains of a monastery known as Kitagarsala where Buddha used to stay during the rainy seasons spent at Vaishali.