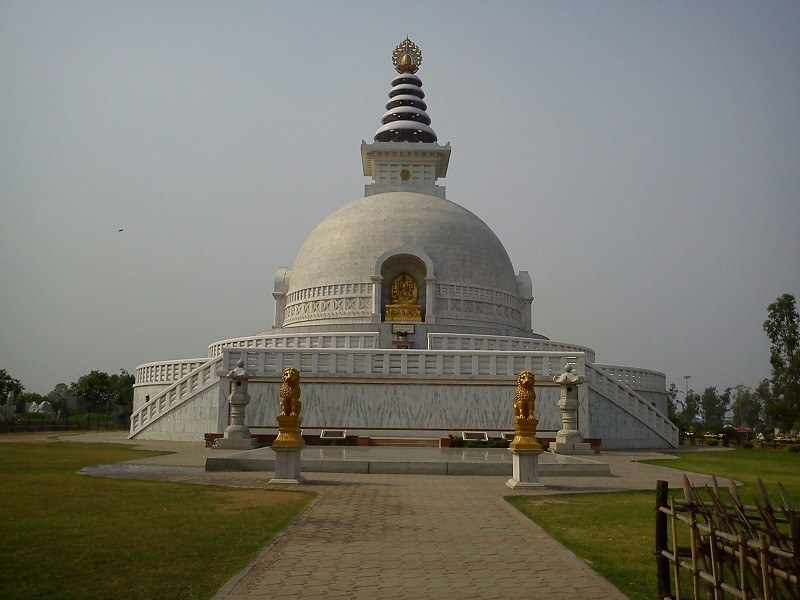 At a distance of 3 km from Basarh Bus Station, Vishwa Shanti Stupa is a peace pagoda located near Vishali Museum in Vaishali, Bihar. Also known as World Peace Pagoda, it is one of the Peace Pagodas in India, and among the most-visited tourist places in Vaishali.

The Vishwa Shanti Stupa or World Peace Pagoda was built by the collaboration of the Indian & Japanese Government in 1969. The peace Pagoda spread in ten acres was constructed under the wish of Fujii Guruji, a Japanese Buddhist. Also known as the pillar of the piece in Vaishali, it is one of the 80 stupas around the world dedicated to Buddhism.

Built-in the Japanese style of architecture, this 38-meter tall pagoda has a 20 meters dome and enshrines Buddhist relics inside it. Several idols of Buddha are placed around the pagoda that depicts the Lord meditating in different postures. It is a huge, white, beautiful stupa surrounded by enormous greenery, serenity, and a pond where the visitors can go for boating. The birth and mahaparinirvana anniversaries of Buddha are the apt times for witnessing the charm and divinity at Vishwa Shanti Stupa in Vaishali.

Just next to Vishwa Shanti Stupa is Abhishek Pushkarni, also known as Coronation Tank and the sacred waters of this tank were used for anointing the elected representatives before their pledge, at the time of Lichchavis.