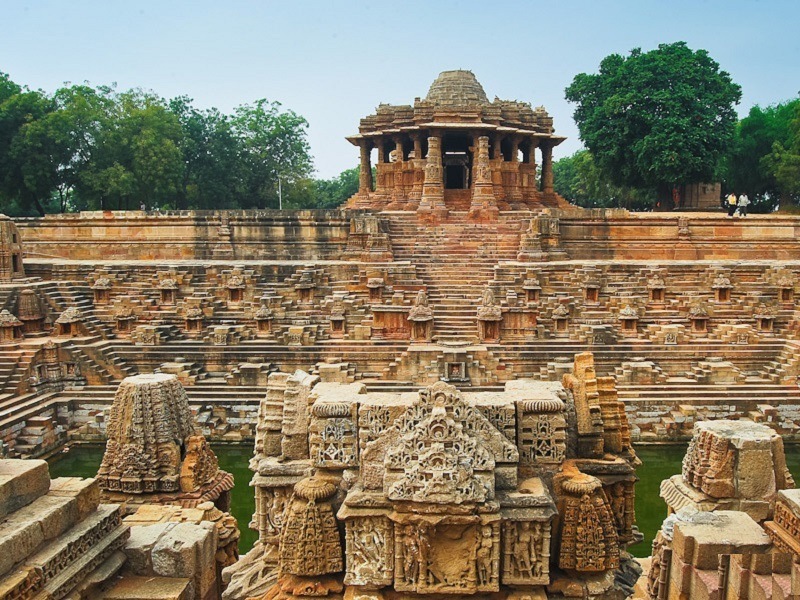 At a distance of 28 km from Mehsana, 35 km from Patan and 100 km from Ahmedabad, Modhera Sun Temple is an ancient Hindu temple located at Modhera village near Patan in Gujarat. Situated on the banks of River Pushpavati, it is one of the popular places of heritage in India, and among the must include places in Patan packages.

Dedicated to the Sun God, the Sun Temple in Modhera was built by King Bhimdev I of the Solanki dynasty in 1026 AD, and is one of the prominent heritage sites near Ahmedabad. This temple not only reflects the architectural abilities of the Solanki rulers but also, speaks highly of the devotional zeal of the ruling dynasty at that time. As in the Sun Temple at Konark, this temple was also designed that the first rays of the Sun fall on the image of Lord Surya at the time equinoxes. The temple was plundered by Mahmud Ghazni but still the architectural grandeur does not vanish. At present, no worship is offered here and the temple is a protected monument under the Archaeological Survey of India. It was added to the list of UNESCO World Heritage Sites in 2014.

Built-in Maha-Gurjara style, the temple complex is divided into three parts - the main temple with a Garbha Griha and Guda Mandap, a detached Sabha Mandap, and Surya Kunda. Also known as Rama Kund, Surya Kund is a rectangular stepped tank that is used to store water and perform ceremonies for worshiping the Sun God. An interesting aspect of the kund is that it is marked by 108 miniature shrines at different levels, which can be accessed by staircases found all around the tank. Besides these, there are four larger shrines dedicated to Lord Vishnu, Lord Ganesh, Natraja, and Sitala Mata around the tank. The temple is considered as one of the prime Patan tourist places.

Beyond the tank are remnants of an ornamented pillared gateway known as the Kirti Torana, which leads to the next structure known as Ranga Mandap or Sabha Mandap. It is a magnificent pillared hall meant for religious gatherings and conferences. It has 52 pillars representing the 52 weeks in a year. Each of these pillars is intricately carved, with every inch of available space depicting scenes from the Hindu epics Ramayana and Mahabharata. The exterior of this open-pillared hall is covered with sculptures and panels depicting deities, social scenes, flora and fauna, and geometric motifs.

The Sabha Mandap leads to the main shrine of Surya known as the Guda Mandap, which is further divided into three parts namely the assembly hall, the vestibule, and the sanctum sanctorum. The Guda Mandap has friezes of the Sun God, other gods, and goddesses on its walls. It is said that the sanctum sanctorum once used to bear the golden idol of Lord Surya. However, the idol was plundered by Mahmud Ghazni yet the walls represent the Sun God in his 12 different facets of each month. The designing of the sanctum was done in a way so that the idol gets the first glimpse of the Sun at equinoxes. The carved walls also depict the aspects of human life like the vicious circle of birth and death. On the sanctum once stood a towering spiral, which has now crumbled to its base. It is said that the Guda Mandap had a tunnel, which could be used by the members of the royal family to flee, in case of an attack.

Just beside the temple complex, there is an Archaeology Museum that houses the intricate stone carvings, some of which have been done on monolithic carved stones. Also, there are many rare artifacts on display even outside the museum, such as sculptures carved on multicolored rocks and stones.

The Modhera Dance Festival takes place every year near the Sun temple, during the month of January. It coincides with the popular Gujarati festival of 'Uttarayan' and is celebrated for three days. Organized by the Tourism Corporation of Gujarat, it celebrates the architectural grandeur and rich cultural heritage of the region. The classical dance forms in the premises of the temple revive the imperial ambiance during the period.