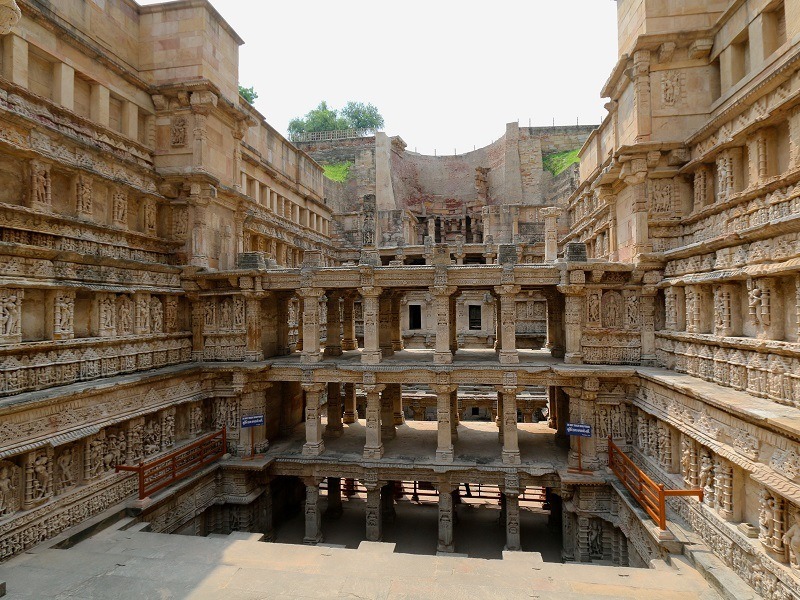 Place Location: On The Banks Of Saraswati River

At a distance of 4 km from Patan Railway Station, Rani ki Vav is an intricately carved stepwell located in the fortified town of Patan. Situated on the banks of River Saraswati, it is one of the finest step-wells in India and among prime places to visit during your Patan trip.

Rani ki Vav was built by Rani Udayamati in memory of her husband Bhimdev I (1022 - 1063 AD) of the Solanki dynasty. The construction started around 1050 AD and was probably completed by Udayamati and Karandev I after the death of her husband. One can find the reference of Udayamati building the monument in the 'Prabandha Chintamani' composed by Merunga Suri in 1304 AD. The vav was later flooded by the nearby Saraswati River and silted over until the late 1980s, when it was excavated by the Archeological Survey of India, with the carvings found in pristine condition. Today, Rani Ki Vav is amongst the best step-wells in India, and one of the most famous legacies of the ancient capital city of Gujarat. It was added to the list of UNESCO's World Heritage Sites in 2014 and also bagged the title of 'Cleanest Iconic Place' in India at the Indian Sanitation Conference 2016 in New Delhi.

Rani ki Vav was built in the complex Maru-Gurjara architectural style, and is one of the must-visit Patan places to visit. Designed as an inverted temple highlighting the sanctity of water, it is divided into seven levels of stairs with more than 500 principle sculptures and over a thousand minor ones combine with religious, mythological, and secular images. This magnificent east-facing step well measures approximately 64 m long, 20 m wide & 27 m deep. Every surface of the well and levels are adorned with fine sculptures of Hindu deities including those of Ganesh on the lower levels, preceded by those of Vishnu, Laxmi-Narayan, Uma-Mahesh, etc. The most imposing imagery is Lord Vishnu reclining on the thousand-hooded serpent Shesha at the water level of the Rani ki Vav.

Rani Ki Vav is quite possibly the only Vav that has such intricate patterns and religious ornamentations in a large amount. The staircases are straight as well as lateral, along with broad corridors that are surrounded by elaborately carved walls. Also, there is a small gate below the last step of the stepwell, with a 30-kilometer tunnel which leads to the town of Siddhpur near Patan. Earlier, it was used as an escape gateway for the king, who built the stepwell in the times of defeat, but currently, it was blocked by stones and mud.

During the month of December or January, a Rani ki Vav festival is held where one can enjoy the cultural programs along with exquisite local cuisine and street shopping.