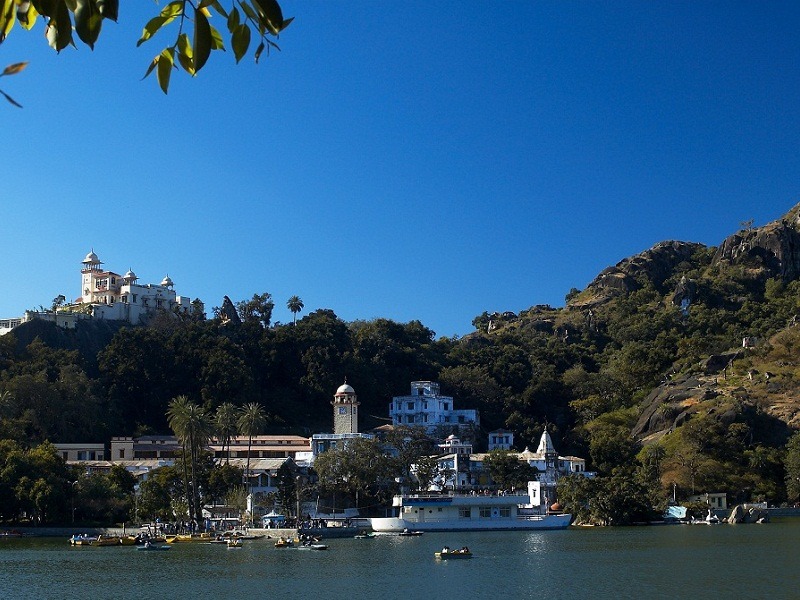 At a distance of 166 km from Udaipur, 233 km from Ahmedabad, 273 km from Jodhpur, 440 km from Jaisalmer, 496 km from Jaipur, 546 km from Indore, 753 km from Delhi, and 770 km from Mumbai, Mount Abu is a popular hill station in the Aravalli Range in the Sirohi district of Rajasthan near the border with Gujarat. It is one of the best hill stations in India, and among the top places to visit in Rajasthan.

Located at an altitude of 1220 m, Mount Abu is the only hill station in Rajasthan state. It lies at the top of a granite peak on the magnificent Aravalli Ranges and is covered with lush green forests. Guru Shikhar is the highest peak of the range, at 1,722 m above sea level. This enchanting hill station is 22 km long and 9 km wide. It is referred to as an oasis in the desert due to several lakes and waterfalls situated in the hills. This is one of the best places to visit near Udaipur, especially during the summer season.

The ancient name of Mount Abu is Arbudaanchal. According to the legend, the Son of Himalayas, Arbuda - a serpent, came down to this spot to rescue Nandi, the vehicle of Lord Shiva, hence the name. In mythology, it is said that Saint Vasistha performed his final recites and retired to the hills of Mount Abu due to his differences with sage Vishvamitra.

According to history, the original residents of Mount Abu were Gurjars. The association of the Gurjars with the mountain is noticed in many inscriptions and epigraphs. As early as the 6th century AD, Gurjars located themselves in Arbuda Mountain and many parts of Rajasthan and Gujarat. Mount Abu was once ruled by the Chauhan family and was treated as a summer retreat by the royalty. British made Mount Abu their retreat from the heat and dust of Rajasthan.

It has been a popular retreat from the heat of Rajasthan and neighboring Gujarat for centuries. Mount Abu has many tourist attractions in the form of temples, lakes, and forts. Dilwara Jain Temples, Guru Shikhar Peak, Adhar Devi Temple, Sri Raghunathji Temple, Achalgarh Fort, Nakki Lake, Gaumukh Temple, and Mount Abu Wildlife Sanctuary are the top places to visit in Mount Abu. Besides the temples and the natural scenery, Mount Abu offers adventure activities in abundance. Mount Abu also has the World Spiritual University and headquarters of Bramha Kumaris, a well-known sect.

The best time to visit Mount Abu is either during the months of February-June or in the months of September-December, as these are the periods when the weather is pleasant enough to enjoy sightseeing. Tourists also plan vacations around the famous Winter Festival held in Mount Abu each year in December.

At a distance of 3 km from Mount Abu Bus Station, Dilwara Temples are the group of five Jain temples situated at Dilwara in Rajasthan. These are among the best places of pilgrimage in Rajasthan, and among the top Mount Abu places to visit.

Dilwara Temples were built between the 11th and 13th centuries AD and are world-famous for their stunning use of marble. Archaeological evidence suggests that Mahavira himself visited the site, making it sacred to the Jains as a tirtha. These are among the must-visit places as part of Mount Abu packages.

At a distance of 1 km from Mount Abu Bus Station, Nakki Lake is a lake situated at the heart of Mount Abu in Rajasthan. It is one of the must include places in Mount Abu holiday packages.

Nakki Lake is famous for its cool and calm atmosphere due to its ideal location in the backdrop of the Aravalli Mountains. It is the sole artificial lake in India, which is situated at a height of more than 1,200 m. This is the largest manmade lake, stretched over an area of around half a mile, and is around a quarter of a mile wide. The lake is beside a dam and is about 20-30 feet deep.

According to the legend, the lake has been carved out from nails by Gods for the protection against the demon Bashkali. Another legend states that the local King put up the challenge of digging up the lake in one night and he will marry his daughter to that one. It is said that a local resident Rasia Balaam had fulfilled that condition, but the King refused .....

At a distance of 2 km from Nakki Lake and 2 km from Mount Abu Bus Station, Sunset Point is a popular view point lies to the southwest of the Nakki Lake behind the dense forest of the Aravalli Range in Mount Abu. This is one of the top Mount Abu tourist places.

Sunset Point is known for offering a beautiful view of the entire mountain valley along with the Nakki Lake. Due to its location, the temperature at this point is very low, which provides retreat during the summer season. In the evening, this place turns into a carnival zone with hundreds of tourists, food stalls and souvenir shops. Staircases have been built for tourists to sit and breathe in the pure air. The hill side is bordered with railing for safety purpose. From Sunset Point, tourists can also go to Bailey's Walk.

Jeeps are available on sharing basis from the town center to Sunset Point at a cost of Rs. 10 per person. It is a 15 minutes' drive to an approachable road, from where one has to walk his way up. This .....

At a distance of 16 km from Mount Abu Bus Station, Guru Shikhar is a mountain peak in the Arbuda Mountains of Rajasthan. It is one of the top places for trekking in Rajasthan, and among the most popular tourist places in Mount Abu.

Guru Shikhar is the highest point of the Aravalli Range. It rises to an altitude of 1,722 m (5,650 feet). Guru Shikhar provides a breathtaking panoramic view of Mount Abu town and the green Aravalli range. According to history, King Prithviraj Chauhan is believed to have travelled along this peak to meet his bride and consummate his marriage with her. The bride was the princess of Prahladanpur, now known as Palanpur. Trekking to this peak is one of the top things to do here as part of Mount Abu tour.

At a distance of 10 km from Mount Abu, Achalgarh Fort is a medieval fort located at Achalgadh village in Sirohi district of Rajasthan. It is one of the Mount Abu sightseeing places.

Achalgarh Fort was originally built by the Paramara dynasty rulers but it was renovated, remodeled and beautified by Rana Kumbha of Mewar in 1452 CE. This structure was built for protecting the region and keeping an eye on the movements of enemies. It is even said that the fort was specially made by Rana Kumbha, who was in charge of numerous huge fortresses in Southern Rajasthan.

Achalgarh Fort is situated at the top of a mountain peak and offers picturesque views. This Fort is surrounded by massive battlement walls and has a very imposing look. The fort is in a dilapidated condition now. The first gate of the fort is known as Hanumanpol, which served as the entrance to the lower fort. It comprises two towers built .....

At a distance of 4 km from Mount Abu Bus Station, Gaumukh Temple is one of the popular sacred sites for Hindus situated atop a hill in Mount Abu. The literal meaning of this temple is 'mouth of a cow'.

The temple is dedicated to Saint Vashishtha. It is said that Saint Vashishtha performed a Yagna at this place which created the 4 major Rajput clans. The Gaumukh Temple is named after the wish-fulfilling cow gifted to Sage Vashishtha by the Devas, after the famous Samudra Manthan (churning of the ocean). At the temple, a natural spring flows through a cow's mouth carved in marble stone.

There is also a tank called the Agni Kund and is believed to be the site of a sacrificial fire which Saint Vashishtha used to perform the Yagna from which the four clans were born. The temple was built by cutting it out from a huge rock. The entrance of the temple has a statue of Nandi along with the idols of Lord Krishna, Lord Rama and Rishi Vashishtha, placed nearby.

Visitors will experience serenity and peace at this beautiful park. On entering the park grounds, visitors are greeted by a rock garden that hosts a wide variety of succulents. Inside the park, there is a citrus and an orchid corner as well as floral displays that include ornamental shrubs, coleus, geraniums, hibiscus, climbers and creepers and an exquisite rose garden.

At a distance of 1 km from Mount Abu Bus Station, Sri Raghunathji Temple is an ancient temple situated next to the Nakki Lake in the hill station of Mount Abu. It is one of the top tourist places in Mount Abu, Rajasthan.

Constructed in the 14th century AD, this temple holds the rich legacy of the ancient Mewar culture. The temple resembles a palace and has two watch towers on both sides of the entrance. The wonderful idol of the Lord is its prime attraction. The temple walls are nicely decorated with colourful paintings showing the Rajputana heritage. .....

Mount Abu with its beautiful landscapes, lakes, waterfalls, sunset points and lush green forests provides an excellent opportunity for nature lovers to appreciate Mother Nature in close. There are 17 nature trails and pathways approved by the state forest department for adventure activities. These trails wind through different parts of the dense forest with grassland and water bodies, where trekking is allowed on foot and on horse.

The Mount Abu started becoming a popular place ever since the British started taking special interest in the region. As the British started promoting the place as the summer capital of the Rajputana estate, they developed the region with beautiful jungle trails. The Bailey's Walk (2 km), Craig's Path (2 km), and Salgaon Trail (3 km) are some exciting jungle trails to experience. For the more rugged trekkers, the Utroj path (6 km), Trevor's Tank (6 km) and Tiger path (8 km) can be adrenalin pumping challenges. Almost all the trails begin at the Nakki Lake.

At a distance of 5 km from Mount Abu Bus Station, 8 km from Achalgarh and 13 km from Guru Shikhar, Trevor's Tank is basically a huge manmade lake situated in the hill station of Mount Abu in Rajasthan. It is one of the popular Mount Abu sightseeing places.

This place is a crocodile breeding spot and was built in the year 1897 AD by the then famous British engineer, Col. G.H. Trevor. Earlier, this region was under the Rajputana state and the then Maharao Kesari Singhji Bahadur of Sirohi gifted this land to his friend Trevor, who converted the area into a small wildlife sanctuary.

Trevor Tank has been promoted by the state tourism department as a part of Mount Abu's eco-tourism. This tank is presently being used by the authorities for crocodile breeding, as a wildlife conservation project. Apart from being a breeding ground and home to these deadly reptiles, the park is also a heaven for birdwatchers. The place is frequented by birdwatchers for spotting pigeons, peacocks and .....