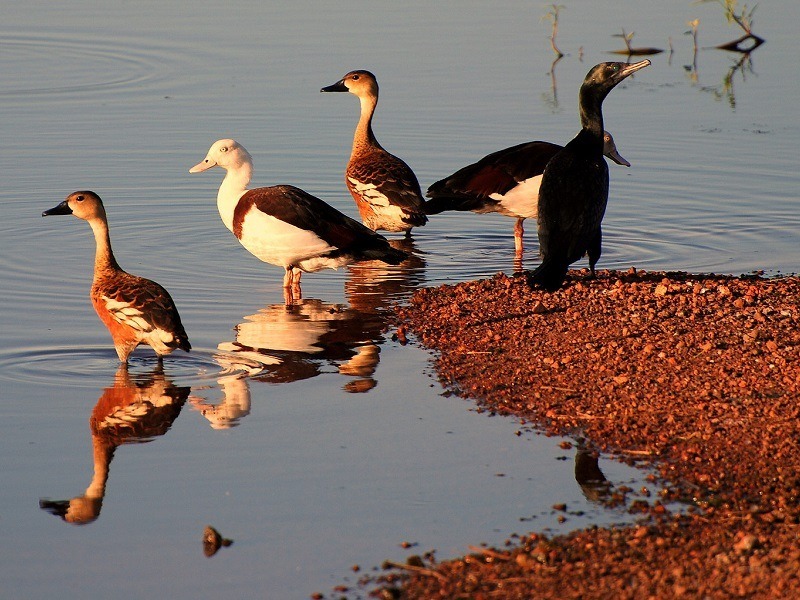 Distance (From Rann Of Kutch): 62 Kms

At a distance of 5 km from Fulay village, 30 km from Nakhtrana and 61 km from Rann of Kutch, Chhari Dhand Bird Sanctuary is a wetland conservation reserve situated near Fulay village in Kutch district of Gujarat State in India. Located on the edge of arid Banni Grasslands and the marshy salt flats of the Rann of Kutch, it is one of the popular wetlands in Gujarat and among the best places to visit in Kutch.

The Chhari Dhand is a seasonal desert wetland and only gets swampy during a good monsoon, receiving water from the north flowing rivers as well as from the huge catchment areas of many surrounding big hills. Chhari means salt affected and Dhand means shallow wetland in local Kutchi language. The wetland was originally spread over 227 Sq. km, out of which 80 Sq. km was the water filled area. This place is a paradise for bird watchers and ornithologists as this seasonal desert wetland attracts nearly 200 species of migratory birds every year in the monsoon and winter seasons. Due to this rich biodiversity, the protected area of Chhari Dhand and some of its adjoining wetlands are under serious consideration for inclusion in the Ramsar Convention.

More than 50,000 waterfowls, 250 species of birds and 55 distinct species of animals have been recorded in and around Chhari Dhand. More than 30,000 common cranes have been reported during winter. Endangered species like Dalmatian Pelican, Oriental Darter, Black necked Stork and Indian Skimmer migrate through these wetlands every year. Thousands of flamingos in their mating plumage, Common cranes and other wetland birds including hundreds of Painted storks, Raptors and Spoonbills among others can be spotted here. The wetland also attracts chinkara, wolves, caracal, desert cats and desert foxes besides endangered birds.

The best time to visit is November to March. Always go with an expert birder and a local guide from the nearby by Fulay village, as it is difficult to find the way and there might be a chance of getting lost in the desert. Do carry some food and water.