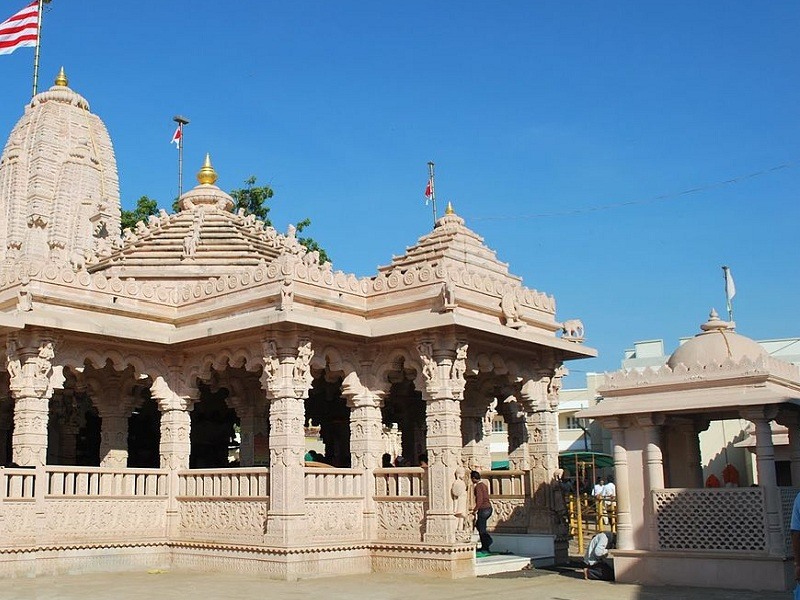 Distance (From Rann Of Kutch): 78 Kms

Place Location: At Mata No Madh

At a distance of 77 km from Rann of Kutch and 101 km from Bhuj, Desh Devi Maa Ashapura is a popular Hindu temple located in Mata no Madh town of Kutch district in Gujarat. It is one of the significant temples in Kutch region and among the popular places to visit as part of Kutch Packages.

Mata no Madh temple is dedicated to Maa Ashapura, the household deity of former Jadeja rulers of Cutch State and she is also considered the patron deity of Kutch. The goddess is also referred to as Desh Devi, meaning the Goddess of the people. The temple was built in the 14th century by two Karad Vanias, Ajo and Anagor, the ministers of the father of Lakho Phulani. The temple was damaged by the earthquake in 1819 and was rebuilt by Sundarji Shivji and Mehta Vallabhaji in 1823. The temple was damaged again by the earthquake in 2001 but was repaired again.

Mata no Madh is a good illustration of traditional Indian architecture with elaborate and intricate carvings. The image of Ashapura Mata in the shrine is a red-painted stone, about six feet high and six feet broad at the base, narrowing to a point in a shape, with some rough likeness to a human form. The unique thing about the idol of Ashapura Mata is that it has 7 pairs of eyes. As the name indicates, she is the Goddess who fulfills the wish & desires of all those who trust and believe her. One can also see a huge bell presented by Mian Ghulam Shah Kalhoro of Sindh along with deepmala weighing 2 kg silver offered by Jamadar Fateh Muhammad in the temple premises.

Navratri is the most important festival celebrated with grandiose and enthusiasm for nine days every year between October and November in honour of Maa Ashapura. Thousands of devotees from Gujarat and other states visit the temple during the festival.