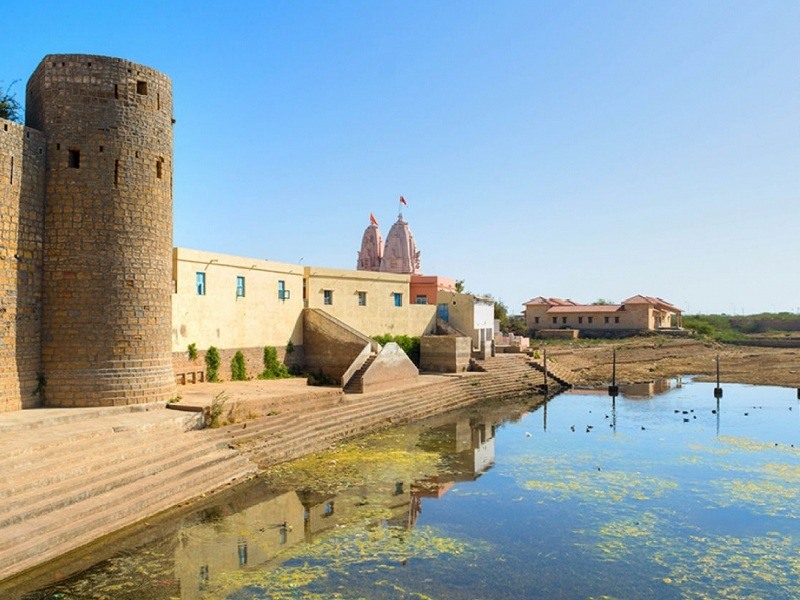 At a distance of 116 km from Great Rann of Kutch and 160 km from Bhuj, Narayan Sarovar or Narayansar is a village in Lakhpat taluk of Kutch district in Gujarat. Situated near Koteshwar Mahadev Temple, it is considered as one of the places of pilgrimage for Hindus in India and among the must visit places in Kutch.

The village got its name from the holy Narayan Sarovar Lake. Narayan Sarovar Lake is one of the 5 holy lakes of Hinduism, along with Mansarovar in Tibet, Pampa in Karnataka, Bindu Sarovar in Gujarat and Pushkar in Rajasthan. According to the Hindu mythology, the lake is associated with a time of drought in the Puranic area, when Lord Vishnu appeared in response to the avid prayers of sages and touched the land with his toe, creating the lake, now revered as holy to bathe in.

There are seven stone temples surrounded by the lake namely Sri Trikamraiji, Lakshminarayan, Govardhannathji, Dwarkanath, Adinarayan, Ranchodraiji and Laxmiji, built by the wife of Maharao Desalji. Accordingly, in 1734, she first built the temples of Lakshminarayan and Trikamray in the same style as the Dwarka temples while the other five temples built by Vagheli Mahakunvar form, along with the more lately built temple of Kalyanray. Collectively called as Narayan Sarovar Temples, these temples are surrounded by a fortified wall and are approached from the lake by flights of stone steps. The lake attracts huge crowds during the annual fair held in November or December. One can also visit the ancient shrine of Sri Koteshwar Mahadev Mandir, which is about 2 km from Narayan Sarovar.

Another attraction at Narayan Sarovar is the Narayan Sarovar Chinkara Sanctuary. The sanctuary came into being in 1981 but was denotified in 1995 with reduced area to allow commercial mining. Covering an area of 444 Sq.km, the sanctuary mostly comprises scrub forests, desert thorn forests, dry savannah-type vegetation and seasonal wetlands. Narayan Sarovar is home to a wide array of wildlife, including many species of mammals, reptiles, and birds. Though the most sighted animal here is the chinkara, the sanctuary also houses caracals, wolves, pangolin, foxes, and cheetahs along with famed great Indian Bustard, floricans, black partridge, francolin, bulbul, larks and many migratory birds.

Timings of Narayan Sarovar Sanctuary: 7 AM to 6.30 PM