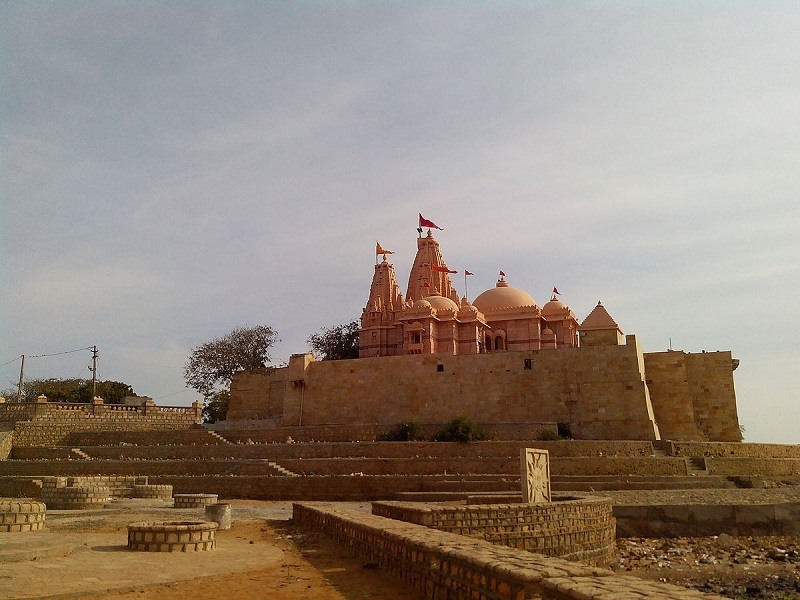 At a distance of 2 km from Narayan Sarovar, 15 km from Lakhpat, 119 km from Great Rann of Kutch, Koteshwar Mahadev Temple is an ancient Hindu temple located at the western tip of India in Kutch district of Gujarat. Situated near Narayan Sarovar, it is one of the sacred pilgrimage sites in Gujarat and among the top places to visit in Rann of Kutch.

Also known as Kotilingeshwar temple, Koteshwtar Temple is dedicated to Lord Shiva and was constructed in 1820 by Jetha Shivji Brahmashaktirya and Seth Sundarji. Koteshwar literally means 'ten million gods'. As per the legend, Lord Shiva had granted a linga full of religious power to Ravana in appreciation of his devotion. Ravana accidentally dropped it here. To punish Ravana for his carelessness, the linga turned into a millions of identical copies. Unable to distinguish the original, Ravana grabbed one and departed, leaving the original one here, around which Koteshwar Temple was built.

Built by stone, this temple stands on a raised platform and fortified against the sea by a wall. In past, the temple was almost entirely cut off from the mainland by tidal creeks but now is connected by road. The temple is encircled by the walls while the gate can be approached by 3 flights of stairs. The terrace has 3 domes of which the central dome is exquisitely constructed. The presiding deity is in the form of linga at the sanctum of the temple. The shrine has images of Lord Ganapati, Hanuman and Parvati. One can also see a brass Nandi Idol, presented by the Rao Deshalji I of Kutch State.

Koteshwar Temple is the last outpost of human construction at the westernmost limit of India. From this point, the glow of light from Karachi, Pakistan can be seen in a clear night. It is an excellent sunset point.