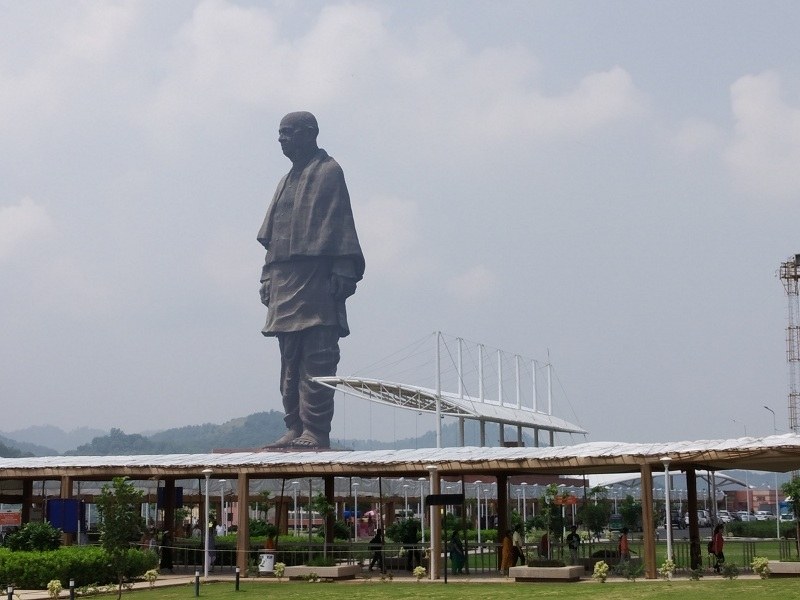 The Statue of Unity is a colossal statue of Indian statesman and the Ironman of India Sardar Vallabhbhai Patel (1875-1950) who was the first Home Minister of India. The statue was inaugurated by Prime Minister, Narendra Modi in 2018. The project was carried out by the Sardar Vallabhbhai Patel Rashtriya Ekta Trust (SVPRET) which was established for this purpose. Designed by the Indian Sculptor, Ram Vanji Sutar, the construction was taken up by the Indian company Larson & Toubro. The Rs. 2,989 crore project took 42 months, and round-the-clock work by 3,400 labourers and 250 engineers to complete. The statue has been erected to propagate Sardar Vallabhbhai Patel's vision of India and to inspire the citizens of India through his patriotism and freedom struggle.

Surrounded by a 12 km artificial lake, the monument compound is spread across 20,000 square meters. The Bronze statue of the founding father of the Republic of India stands 182 m tall grabbing the attention of the whole world as the 'Tallest statue in the World'. The statue is 23 meter taller than China's Spring Temple Buddha statue and almost double the height of the Statue of Liberty (93 m) in US. For this project, the government had been collected nearly 135 metric tonnes of scrap iron from farmers all around the nation. It is one of the most famous places to visit near Ahmedabad.

The statue is divided into five zones of which only three are accessible to the public. From its base to the level of Patel's shins is the first zone which has three levels and includes an exhibition area, mezzanine floor and roof. It contains a museum, a memorial garden and an Audio Visual Hall to depict the life and struggles of Sardar Vallabhbhai Patel. The 2nd zone reaches up to Patel's thighs, while the 3rd extends up to the viewing gallery at 153 m. The concrete towers which form the statue's legs contain two elevators each that can carry 26 people at once to the viewing gallery in all of 30 seconds. One can get a panoramic view of the surroundings from the viewing gallery. Zone 4 is the maintenance area while the zone 5 comprises the head and shoulders of the statue.

In the evening, a 30 minute laser show is conducted every day. There is a three-star hotel inside the complex for those who are willing to stay overnight. From the mainland, visitors need to take a bridge to get to the statue. One can also find ferries to reach the statue from the edge of Sardar Sarovar Dam.