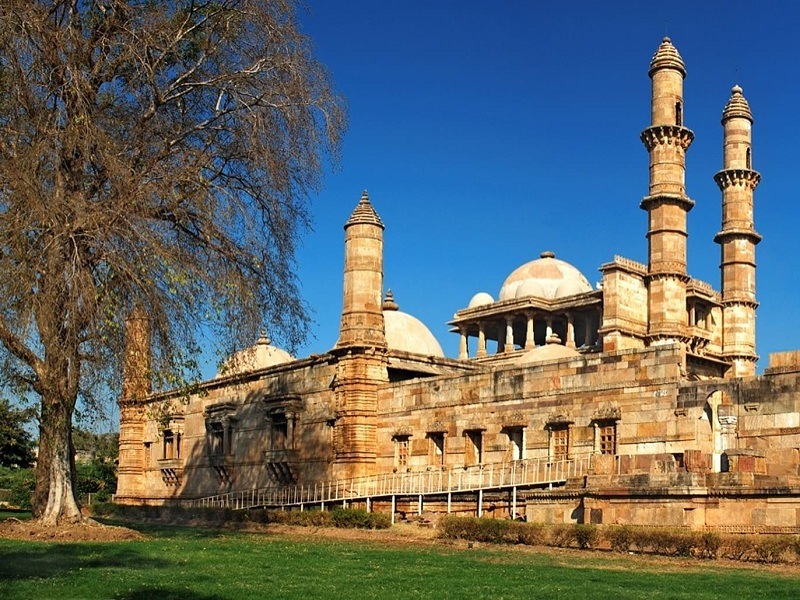 At a distance of 49 km from Vadodara, Champaner-Pavagadh Archaeological Park is a UNESCO World Heritage Site, located in the ancient city of Champaner. It is one of the popular places of heritage in Gujarat, and among the prime places to visit as part of Vadodara tour packages.

Covering over an area of 1,329 hectares, Champaner - Pavagadh Archeological Park is located around the historical city of Champaner, founded by the Rajput King Vanraj Chavda in the 8th century. Due to its strategic point on the trade routes, it lured many invaders including Khalji Dynasty, Chauhan Gurjars, Solanki kings, Khichi Chauhans. Later Mahmud Begada captured the city in 1484 and rebuilt Champaner into a splendid new capital. The region faced major devastation in 1535 CE when looted by Mughal Emperor, Humayun who made Ahmedabad the capital city again to control Gujarat. This marked the start of the decline of Champaner, which slowly fell into ruins. Later, ASI had rediscovered the city with 39 standing monuments that are a beautiful confluence of Hindu, Jain, and Islamic architectural styles.

Among the prominent heritage sites near Ahmedabad, it was inscribed by UNESCO as a World Heritage Site in 2004. The heritage site is studded with prehistoric (chalcolithic) sites, a hill fortress of the early Hindu capital, and remains of the 16th-century capital of the state of Gujarat. The site also includes other vestiges, fortifications, palaces, Jain and Hindu temples, mosques, residential precincts, agricultural structures, and water installations such as step wells and tanks dating from the 8th to the 14th centuries. The transition between Hindu and Muslim culture and architecture in the late 15th to early 16th century is documented in the park, particularly the early Islamic and pre-Mughal city that has remained without any change.

Every corner of Champaner-Pavagadh Archeological Park is worth exploring as it is one of the must-visit Vadodara tourist attractions. There are generally eleven types of monuments at Champaner-Pavagadh and these buildings are situated on the plains of Champaner and on the hills of Pavagadh. Jami Masjid, Sahar ki Masjid, Kalika Mata Temple, Tomb of Sikander Shah, Ek Minar ki Masjid, Kevada Masjid, Helical stepped well, Mandvi or Custom House, Nagina Masjid, Pavagadh Hill, and Citadel Walls are the prominent structures inside the park. Currently, all these historical monuments are under the care of the Archaeological Survey of India. The Kalika Mata Temple, located on top of the 800 m high Pavagadh Hill, is an important Hindu shrine in the region, attracting large numbers of pilgrims throughout the year.