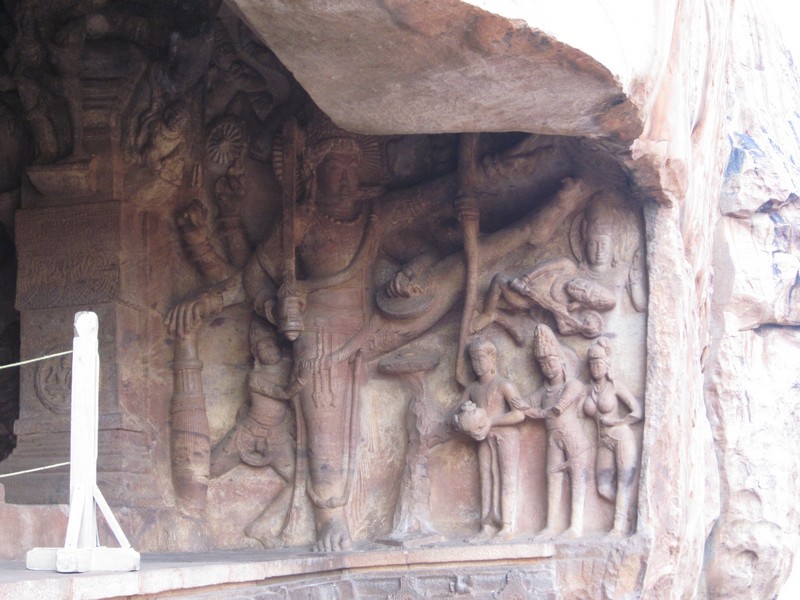 Place Location: On The Banks Of Agasthya Lake

Travel Tips: All four cave temples are situated at the same location and can be visited together.

At a distance of 1 KM from Badami Bus Station, Cave 3 is situated few more steps above Cave 2. This is the biggest and most attractive part of all four cave temples. Dating back to 578 AD, the cave has paintings and sculptures of both Lord Shiva and Lord Vishnu.

The cave can be reached through a plight of rock-cut steps and a large stone entrance. The inscriptions in this cave indicate that it was built by Mangalesha. The third cave is about 70 feet wide and it is a fine example of artwork of Badami Chalukyas. The delicate creativity and image astuteness are the prominence of the cave showcasing the ancient art. The art depicting ancient dresses, jewelry, hairstyle and the lifestyle of the glorious past will leave one mesmerize.

The sculpture of Trivikrama, a larger version of the one seen in Cave 2 is seen here. Images of Lord Vishnu manifested in many forms are seen here - Varaha, with Serpent, Vishnu as Narasimha, Vishnu as Trivikrama. The cave has wonderful bracket figures on the pillars. The bracket sculptures are quite large and detailed. The ceiling has finely carved detailed scenes from Hindu mythology.

There are also murals depicting the divine marriage of Shiva and Parvati. The murals lost their dazzling color but still show the great artwork of ancient Chalukyas.