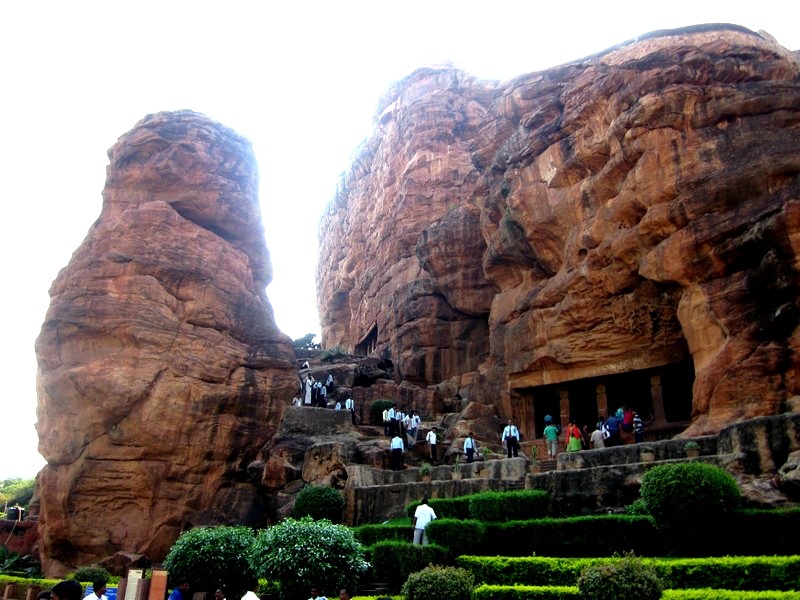 At a distance of 36 Kms from Bagalkot, 104 Kms from Hubli & 457 Kms from Bangalore, Badami, also called as Vatapi is a historical place situated in Bagalkot district of Karnataka. Badami was the capital of mighty Chalukyas from 540 to 757 AD who ruled Karnataka, Andhra Pradesh & Maharashtra between 6th & 8th centuries. Badami is one of the top destinations of Karnataka Tourism.

Badami is famous for cave temples, fortresses, fine carvings, wonderful architecture and breathtaking views. It is located in a valley at the foot of a red sandstone rock formation that surrounds Agastya Lake. Overlooking the sandstone cave temples, Badami fort and several temples are lined up on the shores of Agastya Lake. Three of the cave temples belong to Vedic faith, the fourth cave is a Jain temple dedicated to Tirtankara Adinatha. Out of the three Hindu temples, two are dedicated to Lord Vishnu while one is dedicated to Lord Shiva. The beautiful carvings, mural paintings and bracket figures depict Lord Vishnu and puranic characters in different forms along with various figures & scenes from Hindu mythology.

Chalukyas were feudators under Kadambas of Banavasi. The Chalukyan kingdom was established in 540 AD by Pulakeshi I and it was survived for more than two centuries. Chalukyas rule was marked as important mile stone in the history of South India and a golden age for Karnataka.

Badami is famous for several early inscriptions dating back to 6th century. The earlier of the inscriptions is in Sanskrit dates back to 543 CE, the period of Pulakeshi I or Vallabheswara. The second inscription is found on a rock, which testifies Mamalla Pallava's victory over the Chalukyas in the year 642 AD. In 7th century, Vatapi Ganapati idol was brought from Badami by Pallava who defeated Chalukyas

Apart from history and architecture, the red sandstone hills surronding the lake provide unique setting to the town of Badami that has to be experienced by one personally.

How to Reach Badami - Full Details

Top 10 Places to Visit in Badami

At a distance of 1 KM from Badami Bus Station, Badami caves are carved out of a mighty red sandstone hill which is on the banks of Agasthya Lake. The first cave is dedicated it Lord Shiva and it represents the Brahmanical style.

Built in 550 AD, the cave has an L-shaped open courtyard in front, an open verandah, a pillar hall and a sanctum excavated into the center of its rear wall.

The ceiling of the verandah has fine carving of five-hoded Nagaraja, king of snakes, flanked by charming celestial couples. The .....

The temple was constructed in early 8th century by Chalukya's. Constructed in Dravidian style, the temple is emerged into the Agastya Lake and becomes inaccessible during peak monsoons when the water level in the lake reach the full capacity. The temple has a pillered mukha mandapa, sabha mandapa and inner sanctum with Shiva image. The main temple is accompained by several small shrines on northern and eastern ends.

The form of Bhoothnath is said to be the combination of the God of Soul, Spirit and the Ghost. The temple all dark inside has an image of Shiva in an angry form. The Bhoothnath monuments constitute the early modes and phases of South .....

At a distance of 1 Kms from Badami Bus Station, The Agastya Lake (Tirtha) is a huge lake located beneath the cave temples. Constructed in 5th century, the lake is considered holy due to the healing powers of its water.

The eastern banks of the Agasthya Lake are dotted with Bhoothanatha temples while the caves temples are located on South West part and the fort on North West end. According to puranas, The Pushkarini was a pleasure tank of God in Vaikunta, and is a beloved of Lakshmidevi and Bhoodevi. The Pushkarini was brought and set here by Garuda, the vehicle of Lord Vishnu. A bath in it is believed to destroy all sins.

The lake is usually crowded by the village residents for washing cloths and bath. The quality of water is okay but not a good place to swim. The surroundings of the lake provide great views of the hills surrounded by the historical monuments. The Bhoothanatha temple which is emerged into the lake is a beautiful sight with a backdrop of large hillock.

At a distance of 5 Kms from Badami, Banashankari Temple is located at Cholachagudda. Dedicated to Banashankari Devi, an incarnation of Goddess Parvati, it's one of the famous temples in the district.

The original temple was built in 8th century, believed to be by Rashtrakutas, but the present structure traces its origin in the 17th century. This temple represents a combination of Dravidian & Nagara temple architecture. Haridra Tirtha, a large temple pond with a tall lamp tower built on a three story structure is situated opposite to the entrance of the temple and it's a delight to watch. The entire pond is surrounded by a corridor built with stone.

The Goddess can be seen seated on a growling lion and crushing a demon with her foot. The idol is carved out of a black stone. The Goddess Banashankari is depicted here with eight arms sitting on a roaring lion. The temple features three large lamp polls in the main compound. These lamp polls are lit during special occasions and .....

At a distance of 1 KM from Badami Bus Station, Cave 3 is situated few more steps above Cave 2. This is the biggest and most attractive part of all four cave temples. Dating back to 578 AD, the cave has paintings and sculptures of both Lord Shiva and Lord Vishnu.

The cave can be reached through a plight of rock-cut steps and a large stone entrance. The inscriptions in this cave indicate that it was built by Mangalesha. The third cave is about 70 feet wide and it is a fine example of artwork of Badami Chalukyas. The delicate creativity and image astuteness are the prominence of the cave showcasing the ancient art. The art depicting ancient dresses, jewelry, hairstyle and the lifestyle of the glorious past will leave one mesmerize.

The sculpture of Trivikrama, a larger version of the one seen in Cave 2 is seen here. Images of Lord Vishnu manifested in many forms are seen here - Varaha, with Serpent, Vishnu as Narasimha, Vishnu as Trivikrama. The cave has wonderful bracket figures .....

At a distance of 1 KM from Badami Bus Station, Cave 2 is situated just few meters above Cave 1 and it is dedicated to Lord Vishnu.

This is the smallest of four caves at Badami. Lord Vishnu is manifested as a dwarf or Trivikrama in this cave. Lord Vishnu is seen in the position of conquering the Earth by his one foot and ruling the sky with his other foot. The entrance of the cave has two guards or dwarapalakas holding lotus in their hands. Different forms of Lord Vishnu are portrayed here. The incarnations of Lord Vishnu are carved in this cave including Varaha and Lord Krishna riding a Garuda. Another highlight of the cave is the lotus encircled by 16 fishes.

The ceiling has the carvings of Anantasayana, Brahma, Vishnu, Shiva & other Ashtadikpalakas. The carving of celestial couple on the ceiling is attractive. Another puzzle like carving on the roof with couples on four sides is interesting. The wall brackets are finely carved with different puranic characters.

At a distance of 1 KM from Badami Bus Station, Cave 4 is situated towards the east of Cave 3 and it was built in the 8th century. The Cave is dedicated to Jain Thirthankaras.

The main attraction of the cave is the sculpture of Lord Mahavira adoring the shrine along with the images of Padmavathi and other Thirthankaras. Mahavira, the 24th Jain Tirthankara is depicted in a sitting posture and Tirthankara Parshwanatha is carved with a serpent at his feet.

The cave is small in size but all the corners of the cave are finely carved with different Thirthankaras of Jain faith. The pillars have fine carvings of different characters and garland shaped designs. The wall brackets and the side walls of Mahavira and Parshwanatha carvings have small carvings of interesting images.

From the location of Cave 4, you can capture a breathtaking view of Agastya Lake, Badami Fort and Badami town.

At a distance of 1.5 Kms from Badami Bus Station and behind Badami Museum, Badami Fort is situated on top of a hill on the northern banks of Agasthya Lake, other side of Cave Temples.

The fort provides magnificent views of all the monument of Badami, including Caves, Lake, Bhoothanatha temples and other monuments. Entire Badami town can be seen from the fort hill. Though .....

At a distance of 1.5 Kms from Badami Bus Station, Mallikarjuna Group of Temple is a set of temples dedicated to Lord Shiva. These temples are located within an enclosed compound just before Boothanatha Temple.

Built in Phamsana style (stepped pyramid), these temples were assumed to be constructed during Rashtrakutas and Kalyani Chalukyas. The outer walls of the temple are plain rock without any carvings. The tower of inner sanctom is built in typical Rashtrakuta style of architecture. The main shrine has a pillerd mukha madapa, an enclosed madhya mandapa followed by the inner sanctom. The inner walls and pillars are mostly plain.

Several smaller shrines are built to the eastern and nortern sides of the main temple. Most of them are closed for renovation.

At a distance of 1 Kms from Badami Bus Station, the Archeological Museum is located at the foothills of Badami Fort on northern banks of Agasthya Lake. Established in 1976, the museum is a treasure of pre-historic artifacts of the region including stone implements, sculptures, architectural parts, inscriptions, etc, dating from 6th to 16th century AD.

At the entrance of Museum, Shiva's bull welcomes the tourists. The museum has four galleries, an open air gallery in the veranda and an open air gallery in front. The galleries house excellent examples of local sculptures; the highlights include the notable Krishna panel, and other panels depicting scenes from the Ramayana, Mahabharata & Bhagwad Gita. One of the galleries has a scaled model of a pre-historic cave, copies of faded murals from Cave 3.

Photography is prohibited in the museum.