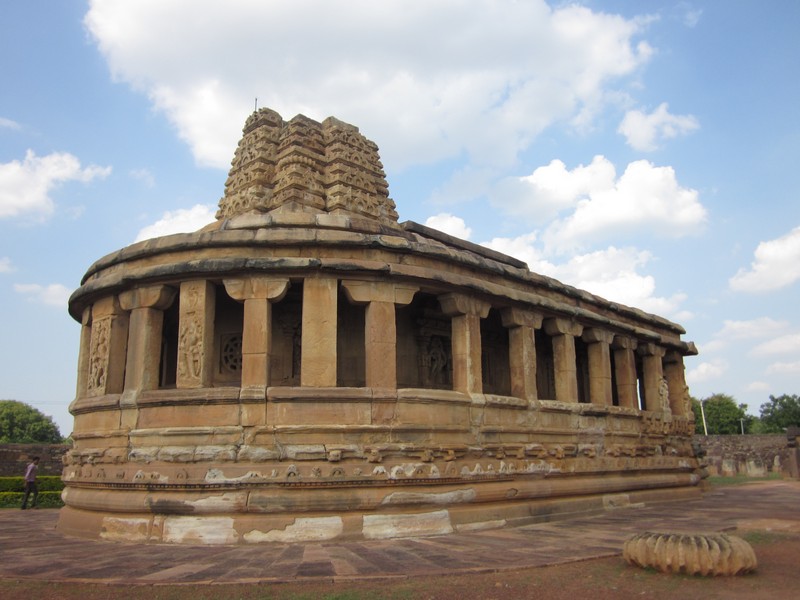 At a distance of 13 km from Pattadakal, 33 km from Bagalkot, 34 km from Badami, 136 km from Hubli, and 443 km from Bangalore, Aihole is a historical site located in the Bagalkot district of Karnataka. Situated on the banks of the Malaprabha River, it is one of the popular places to visit in Karnataka for history buffs, & architecture enthusiasts.

A UNESCO World Heritage Site, Aihole, along with Pattadakal, is considered as the cradle for South Indian Temple architecture. It is one of the popular places of heritage in Karnataka. There are more than 125 temples in Aihole constructed between the 5th and 8th centuries during Badami Chalukya's rule, which are the must include places in Aihole Tour Packages. Few temples were built during Rashtrakutas and Kalyani Chalukya's who ruled until the 12th century. The temples are built in different architectural styles representing Dravidian, Nagara, Phamsana, and Gajaprastha models.

Most of the temples are located within a 2-3 km radius while the important monuments are situated within a secured compound. Main temples are well preserved by the archeology department and several other sites are still being renovated. Durga Temple, Ladkhan Temple, Ravana Pahadi, and Archeology Museum are the top places to visit in Aihole.

About 140 km from Aihole, Hubli Airport is the nearest airport that has direct flights from Bangalore, and Mumbai. About 33 km away, Badami Railway Station is the nearest railhead that has well train connectivity with Gadag, Solapur, Bangalore, Pune, Hubli, and Bijapur. About 92 km, Gadag is th major railway station that has well-train connectivity with cities like Hubli, Bangalore, Hospet, Solapur, Bellary, Guntakal, Tirupati, Hyderabad, Bhubaneshwar, and Kolkata. Aihole is well connected by bus with Gadag, Bagalkot, and Badami.

It usually takes around 4-5 hours to visit all the monuments in Aihole. The road between Badami and Aihole was worse (as of Oct 2014) and the 34 km stretch took almost 1.5 hours. Aihole can also be visited along with Pattadakal & Badami Tour Packages.

Being a small village, Aihole has no accommodation options. However, Badami has a wide range of hotels for tourists that range from budget to five-star hotels. The properties offer luxurious cottages, suites, and family rooms for their guests equipped with all the modern amenities to make their stay comfortable. They have facilities like in-house restaurants, banquet facilities, swimming pools, currency exchange, and even tailor-made local sightseeing packages.

How to Reach Aihole - Full Details

Top 10 Places to Visit in Aihole

At a distance of 100 m from Aihole Bus Stand, Durga Temple, also known as Fort Temple, is an ancient Hindu shrine situated at Aihole, Karnataka. It is one of the most famous places to visit in Aihole with striking architecture and wonderful carvings.

Dedicated to the goddess Durga, the Durga Temple is located inside the main enclosed complex of Aihole monuments. The name of the temple is originated from a fortification (durgam) that existed around the temple earlier. It is one of the main places to visit as part of Aihole tour packages.

Build between the 7th and 8th centuries by Chalukyas, the temple plan in U shape resembles that of Buddhist Chaitya halls. The temple has a mukha-mandapa, a sabha-mandapa, and an inner sanctum with Shiva linga. The unique part of the temple is the pillared corridor around the temple that allows pilgrims to take pradakshinas .....

At a distance of 200 m from the Aihole Bus Stand, the Archaeological Museum is a museum situated inside the Durga Temple complex, Aihole. It is one of the popular places to visit as part of Aihole tour packages.

Planned as a sculpture shed in 1970, the Archaeological Museum in Aihole was converted into a full-blown museum in 1987. The museum houses a good collection of artifacts from the Aihole, Pattadakal, and Badami regions. It is one of the must visit Aihole tourist places.

The museum consists of 6 galleries and an open-air gallery. The artifacts in the museum are dated between the 6th and 15th centuries. A variety of Ganesha sculptures, Saptamatrikas with archaic features, Nataraja, Ambika of Jaina affinity, an attractive sculpture of Bodhisatva, and a mutilated anthropomorphic figure of Megalithic period are some of the important exhibits.

At a distance of 200 meters from Aihole Bus Stand and 100 meters south of Durga Temple, Ladkhan Temple is the oldest temple in Aihole believed to be built in 5th century by first Chalukyan ruler Pulakesi I. It is located inside the main enclosed complex of Aihole monuments. The temple is built in Mandapa style with plan roof.

Dedicated to Lord Shiva, the temple name is originated from Ladkhan, a Muslim general from Bijapur sultanate who stayed in the temple during their invasion of the region. Originally a Surya temple, the temple has a mukha-mandapa and a large sabha-mandapa. There is no separate garbhagriha in the temple and a stone booth is added to house the deity.

The large pillars in the mukhamandapa have beautiful carvings of gods along with floral designs. The outer walls are also exhibit extensive designs of early Chalukyas. The sabhamandapa has a big bull at the center. Large plain pillars support the sabhamandapa. .....

At a distance of about 800 meters from Aihole Bus Stand & Durga Temple Complex, Ravanapahadi is a wonderful rock-cut cave temple situated towards north-east side of Durga Temple.

Built in 6th century, the cave temple is dedicated to Lord Shiva. The exterior of the cave is simple with 4 pillars and dwarapalakas. The inner part of the cave has a rectangular verandah followed by a square hall and a garbhagriha. The major attraction of the cave is a carving of Lord Shiva with 10 hands in different Bharatanatya postures (a similar figure with 18 hands can be seen in Cave 1 of Badami).

The other important carvings in the cave include Mahishasura Mardhini, Varaha carrying Bhudevi, Lord Shiva & Parvathi. The inner hall of the cave is mostly plain and the garbha-griha has a monolithic Shivalinga. Outside the cave, there is a platform with nicely carved Nandi. There are two stone mandapas outside the cave on both sides of the entrance.

At a distance of about 500 meters from Aihole Bus Stand & Durga Temple Complex, Mallikarjuna Temples are a group of temples situated on the way to Meguti Jain Temple past Jyotirlinga Temple Complex.

The complex has several temples build in different styles ranging from small to medium. Some of these temples are preserved while a majority of them are still in ruins. Excavation and restoration work is going on for several temples.

The complex features few unique structures. One of the Phamsana style temples built on an elevated platform has a roof sliding down through the sikhara to entrance. One temple with collapsed sikhara has a small mukhamandapa which is closed on one side. The mukhamandapa and rangamandapa of the temple are separated by lattice design windows.

There is a wonderfully built gateway in the center of the complex. There are also several large pillars scattered around the complex. The complex also comprises a large stepped temple tank in great condition.

Constructed in 634 AD, Meguti Jain Temple is the only dated monument in Aihole. The temple has very valuable inscription in the form of poetry from the reign of Pulakesi II. The temple has two levels, ground level with a large pillared mukhamandapa with empty inner sanctum and a small shrine on top of it which can be reached through steps. The temple has seated figures of Jain teerthankaras. The construction of the temple appears to be incomplete.

One can have a panoramic view of the entire Aihole village and all the monuments of Aihole from the hilltop. The hill is supposed to be the site of Aihole Fort, but except the walls, none of the structures survive today.

From main road, the temple can be reached .....

At a distance of about 2.5 Kms from Aihole Bus Stand & Durga Temple Complex, Galaganatha Temples are a group of about 30 temples situated on the banks of Malaprabha River.

Dedicated to Lord Shiva, the complex has several medium and small temples. Built in Dravidian and Nagara styles, some of the temples have a Shivalinga though no active poojas are done here. One of the temples has a large hall with Nandi and Shivalinga in the sanctum. Pillars in the hall are nicely carved in round shape with several wonderfully engraved images of gods at the bottom of pillars. The hall and sanctum are separated by richly designed lattice windows.

To reach Galaganatha Temple Complex from Aihole, you have to go towards Pattadakal for 2 km and take diversion to the right towards the river and driver for 500 meters.

The complex is open till 6 PM.

There is a pushkarini (temple tank) beside the Chakra Gudi.

At a distance of 200 meters from Aihole Bus Stand and 100 meters south of Durga Temple, Goudaragudi Temple is one of the oldest temples in Aihole assigned to 5th century. It is situated beside Ladkhan Temple.

This temple is built in Madapa style on an elevated platform, few feet below the ground level of remaining temples. Dedicated to Mahalakshmi or Bhagavathi, the temple has a verandah supported by 16 pillars with slanting roof. The sanctum has circumambulatory path for pradakshinas. There are beautiful carvings of kalasha along the outer wall of the temple.

The entrance of the garbhagriha has image of Garuda and Gajalakshmi with four elephants above. The roof has a square platform, larger than the one seen on top of Ladkhan temple without any image.

At a distance of 200 meters from Aihole Bus Stand and 100 meters south of Durga Temple, Suryanarayana Gudi 7th / 8th century temple situated opposite to Ladkhan Temple.

Dedicated to God Surya, this temple is built in Rekhanagara style with curvilinear tower. The temple consists of a small mandapa with four pillars, rangamandapa with four tall pillars and 12 half pillars followed by the garbhagriha. The doorframe of the sanctum has an image of Garuda holding two snakes, Ganga, Yamuna and an image of Surya in seated posture.

The sanctum has a statue of God Surya. The sanctum also has four pillars inside, which is a peculiar design. The sikhara is partially damaged.