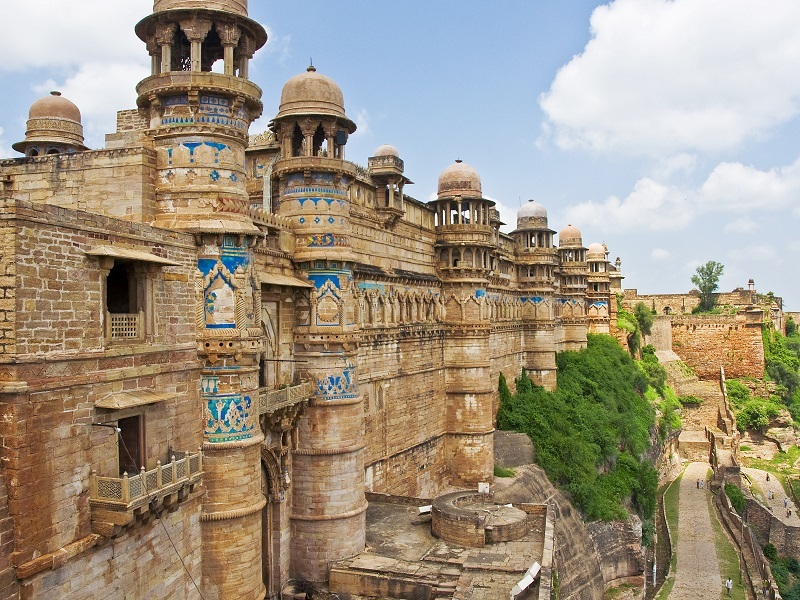 Place Location: In The Center Of Gwalior City

The fort was built by a local king, Suraj Sen in 8th century AD on a solitary rocky hill called Gopachal. According to legend, the king was cured of leprosy, when a sage named Gwalipa offered him the water from Suraj Kund, now lies within the fort. The king constructed a fort, and named it after the sage. Since then many dynasties ruled over the place from Tomars, Mughals, Marathas and the British. Finally, Gwalior Fort was acquired by Scindias in 1886 and ruled until the independence of India in 1947. It was here that Tatya Tope and Rani Jhansi Lakshmi Bai fought for their freedom.

Spread over an area of 3 sq. km, Gwalior Fort is one of the biggest forts in India and also one of the top places of heritage in Madhya Pradesh. A postage stamp has been issued by the Indian Postal Service to immortalize the importance of this place. Surrounded by concrete walls of sandstone, the Gwalior Fort encloses three temples, 6 palaces and several water tanks. The fort has two gates; the main entrance is the ornate Elephant Gate and the other is the Badalgarh Gate. Man Mandir, Gujari Mahal museum, Teli-ka-Mandir Temple, and Saas Bahu Temple are the top attractions within the fort complex.

Man Mandir Palace is one of the spectacular palaces located at the north-east end of the fort. It was built by Man Singh Tomar in between 1486 and 1516 AD. The palace exhibits a combination of both the Hindu as well as the Mughal architectural touch. The intricately designed tiles adorn the exterior of the palace. The important spot in this palace is the Jauhar Pond, where the Rajput ladies committed sati. The interior is decorated with beautiful colored paintings of human figures, animals, flowers and glazed tiles. This was the place where Aurangzeb prisoned his brother Murad and poisoned him slowly to death by using opium (drug).

Gujari Mahal was built by Raja Man Singh Tomar in 15th century for his wife Mrignayani, a Gujari princess. Now, the palace has been converted into an archaeological museum. It houses statues, weaponry, stone-work artifacts and bronze antiques. The key attraction of the museum is the Gyraspur Shalabhanjika sculpture and the Indian Mona Lisa statue. The Karan Palace, the Jahangir Mahal and the Shah Jahan Mahal are other palaces within the fort complex that are worth seeing.

Out of the three temples, the Teli-Ka-Mandir is the most prominent temple inside the fort. Dedicated to Lord Vishnu, Teli ka Mandir was built in 850 AD during the rule of the Pratihara king Mihira Bhoja. Elevating to the height of 100 feet, Teli ka Mandir is the tallest and most stunning temple in the limits of the Gwalior Fort. It is famous for its South Indian architecture with North Indian decorative motifs. The major attraction of Teli ka Mandir is the gigantic image of 'Garuda'.

The Saas-Bahu temples can be found on the eastern side of the fort. Built in 1092 AD by King Mahipala of the Kachchhapaghata dynasty, the temple is one of the greatest architectural marvels situated in Gwalior Fort. Dedicated to Vishnu, it is pyramidal in shape, built of red sandstone with several stories of beams and pillars. One can also visit Suraj Kund and Gurudwara Data Bandi Chod here.

Apart from these structures, there are around 1500 idols of Jain tirthankaras on Gopachal Hill, which includes the size from 6 inch to 57 feet in height. All the idols are carved by cutting the hilly rocks and are very artistic. Most of the idols were built in 1341-1479, during the period of King Dungar Singh & Keerti Singh of Tomar dynasty. The idol of Rishabhanatha, the 1st Tirthankara, is the tallest one which is about 58 feet 4 inches high.