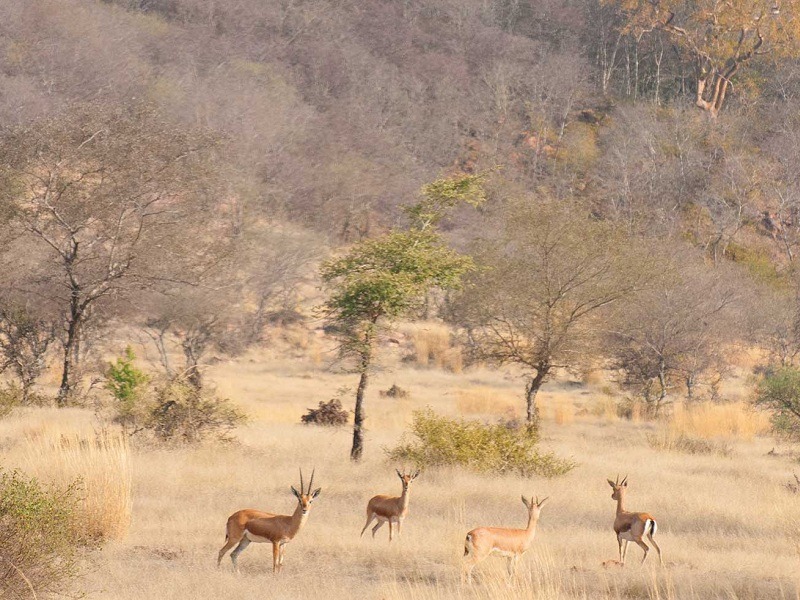 At a distance of 5 km from Shivpuri, 89 km from Jhansi and 116 km from Gwalior, Madhav National Park, one of the oldest parks in India, is situated in Shivpuri district of Madhya Pradesh. It is one of the major wildlife sanctuaries in Madhya Pradesh and among prime place to visit on a Gwalior tour.

The park was established as Madhya Bharat National Park in 1955. It was declared as a National Park in the year 1959 and renamed as Madhav National Park after Madhav Rao Scindia, the Maharaja of Gwalior. It was originally the shooting reserve of the Maharaja. Even before this, during the reign of the Mughals, its dense forests were the hunting grounds of the Mughal emperors. It is also believed that from the dense forests of Madhav National Park, Akbar once captured elephants for his stables in the year 1564 CE. Since the area was a royal shooting reserve, it was well protected and flourished with wild life and was famous for its tigers.

The park is unique in having both lake and forest ecosystems. Sakhya and Madhav Sagar are the two lakes in the park, which are important biodiversity support systems. These lakes not only add to the natural beauty of the area, but also provide a permanent source of water to the wildlife, and a fine wetland habitat to the aquatic fauna including thousands of migratory waterfowls. Marsh Crocodiles are in abundance in Sakhya Sagar Lake. The typical fauna, which are present in the Madhav National Park, is the flat grasslands and deciduous trees. The forested mountains also shelters large number of wild animals. Hunting is totally banned inside this national park.

Boating is allowed in the Sakhya Sagar Lake and it is also one of the best ways to spot the birdlife in the park. A viewing lodge constructed by the Scindias, called as the Shooting Box, overlooks the lake. Another attraction of the park is the George Castle, built by Jiwaji Rao Scindia for an overnight halt for tiger shooting by the British King George V while on a hunting expedition. The castle offers majestic views of the lake and its surroundings during sunset.

The Park is open throughout the year while October to March is the best season. During summer, spotting of wildlife species is much easier. Winter is the best season for watching migratory waterfowls in Sakhya Sagar.

The Park does not operate any safari but they allow private vehicles inside the park for safari.