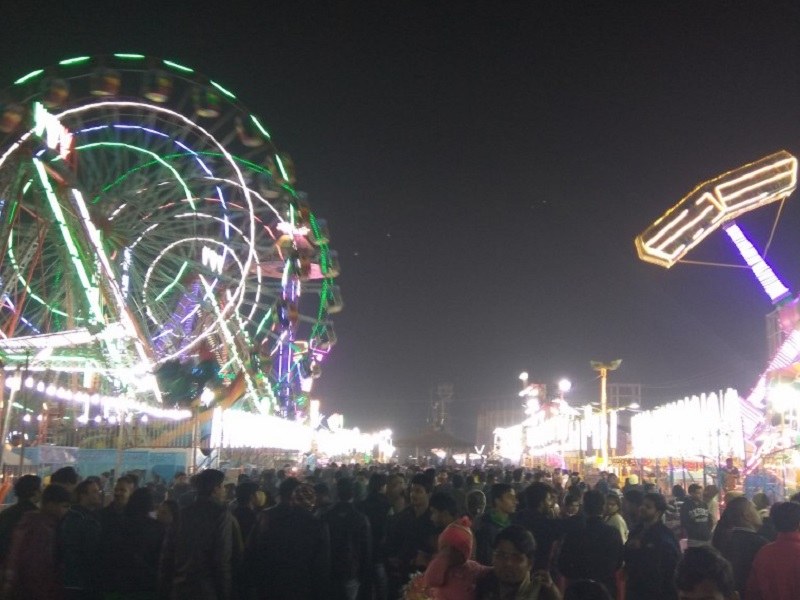 At a distance of 2.5 km from Gwalior Junction, Gwalior Trade Fair is one of the largest fairs of Madhya Pradesh. It is the most colorful fair of North India and one of the major attractions of Gwalior.

Gwalior Trade Fair was started in 1905 by Maharaja Madhav Rao Scindia, the king of Gwalior. The fair is held at the Mela Ground, also known as Pragathi Maidan in the Race Course Road of Gwalior. Started as a cattle fair, this Trade Fair now emerged as the biggest fair in Madhya Pradesh. The fair is not only popular in India but it is also enjoys its international acclaim. The fair is organized by Gwalior Trade Fair Authority (GTFA), a nodal agency of Government of Madhya Pradesh. Usually the fair starts every year around the middle of December and lasts for a month.

The Mela Ground spreads over an area of 104 acres which is divided into several pavilions and sectors. It has 1200 permanent pavilions, more than 500 platforms and 3000 kiosks. Both private national and multinational and governmental companies set up their stalls to sell their varied products. The items that are sold here ranges from the products of cottage industry, leather goods, cloths and apparels, luggage, pottery, electronics and home appliances, automobiles and furniture, plastic goods to metal wares. The Trade Fair provides Golden opportunity to expand business. Artisans from all over India gather at this platform to display and find buyer for their art piece.

The cattle trade fair is still an integral part of the Gwalior Trade Fair with about 10,000 animals being sold or bought each year. Hasya Kavi Sammelan, Kavvali Competition, Mushairas, Cultural Evenings, Music Nights and many other activities are the major attraction and integral part of the Mela. Dog show is also organized at the end of cattle fair. For entertainment of people, especially children the fair is lodged with their favorite swings, magic shows, giant wheels, magic shows etc.