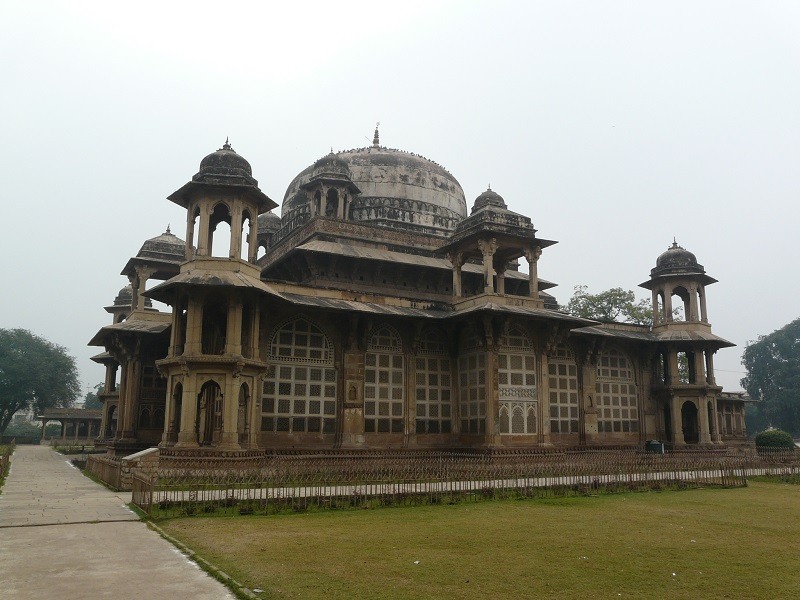 At a distance of 1 km from Gwalior Fort and 3 km from Gwalior Junction, Tombs of Mohammed Ghaus & Tansen are situated in the town of Gwalior, Madhya Pradesh. Well known for its architecture, the tomb complex is one of the prominent sightseeing attractions in Gwalior.

The Tomb of Mohammad Ghaus was built in 16th century AD during the Akbar's rule. Ghaus Mohammed was an Afghan Prince who later converted into a Sufi saint. According to legend, Mohammad Ghaus assisted Babur when he was conquered the fort of Gwalior in 1526 CE. The Sufi saint who belongs to 16th century occupies an important position in the history of Mughal India and is said to have had great influence over Mughal emperors like Babur and Humayun.

Tomb of Ghaus Mohammed is a prominent pilgrimage center of both Muslims and Hindus. The structure of this tomb is typical Mughal architecture with hexagonal pillars stand at each of its four corners. The building is square in plan and topped by a square dome decorated with blue ceramic tiles. It has hexagonal domed kiosks at its corners together with sloping eaves that project from exterior. The tomb walls feature intricate carvings and latticework.

The Memorial of Tansen, also known as the Tomb of Tansen, is located in the vicinity of Muhammad Ghaus Tomb. Tansen was the famous musician and one among the nine jewels of Akbar's court. He is among the most influential personalities in North Indian tradition of Hindustani classical music. Tansen is remembered for his epic Dhrupad compositions, creating several new ragas, as well as for writing two classic books on music Sri Ganesh Stotra and Sangita Sara. He was buried near to his guru and this burial site is a beautiful piece of architecture.

Surrounded by gardens, the Tomb of Tansen is of typical Mughal architectural style. The tomb also serves as a part of the living cultural heritage of Gwalior. Every year in the month of November / December, a national level annual Tansen Music Festival is held at the place to venerate this great musician. In this grand festival, many renowned classical singers from all across the country come and deliver powerful performances, building a beautiful and a serene atmosphere.