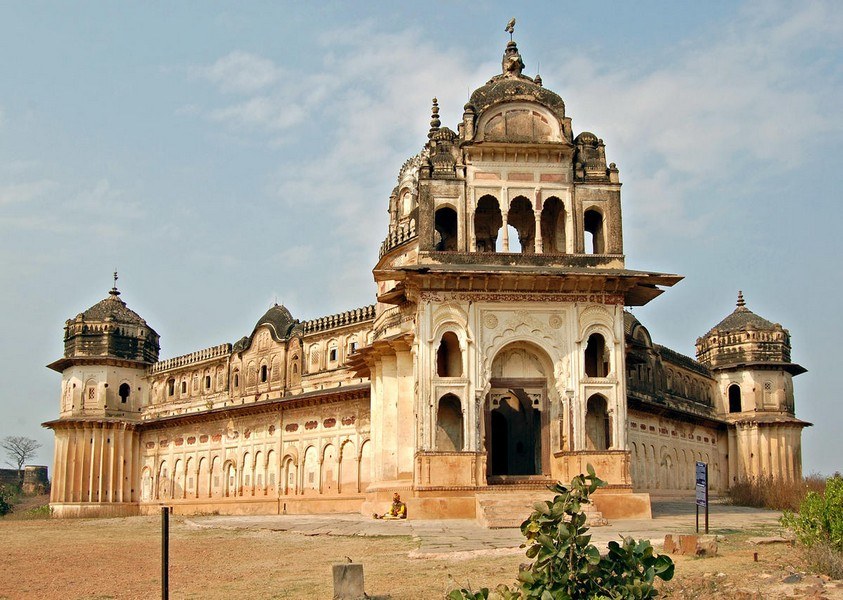 At a distance of 2 km from Orchha Fort, Lakshmi Narayan Temple is a huge temple situated in Orchha town of Madhya Pradesh. It is one of the famous historical places to visit in Orchha other than Orchha Fort complex.

The temple is dedicated to Goddess Lakshmi, who is the Hindu goddess of wealth. Built by Bir Singh Deo in 1622, Sri Lakshmi Narayan Temple is one of the three most important temples in Orchha and also an interesting tourist attraction of the place. Within the inner chambers of the temple, Vir Singh made arrangements for offering sacrifices for Lakshmi. But due to inadequate maintenance, the condition of the temple soon worsened. It was reconstructed by Prithvi Singh during 1793.

This temple displays a perfect and unique mix of temple and fort architecture. The structure of the temple is a rectangular one with four multi-faced projecting bastions at its four corners. It has been built with lime mortar and bricks, with slots for cannons used during the wars. The interiors contain the most exquisite of Orchha's wall paintings. Covering the walls and ceiling of three halls, these murals are vibrant compositions and cover a variety of spiritual and secular subjects. They are in excellent state of preservation, with the colours retaining their vivid quality.

The themes of this painting have been taken from Rama Charitra Manas as well as from India's first battle for Independence fought in 1857. The carved designs of the temple have been arranged in a geometrical form and below there are scenes from the life of Lord Krishna, adorned with flowers and animals. The altar of this temple is constructed in the shape of a yoni or vulva while its inner sanctum is similar to a Tantric cult. Though the temple is dedicated the Goddess Lakshmi, there is no idol of the Goddess kept inside the temple.