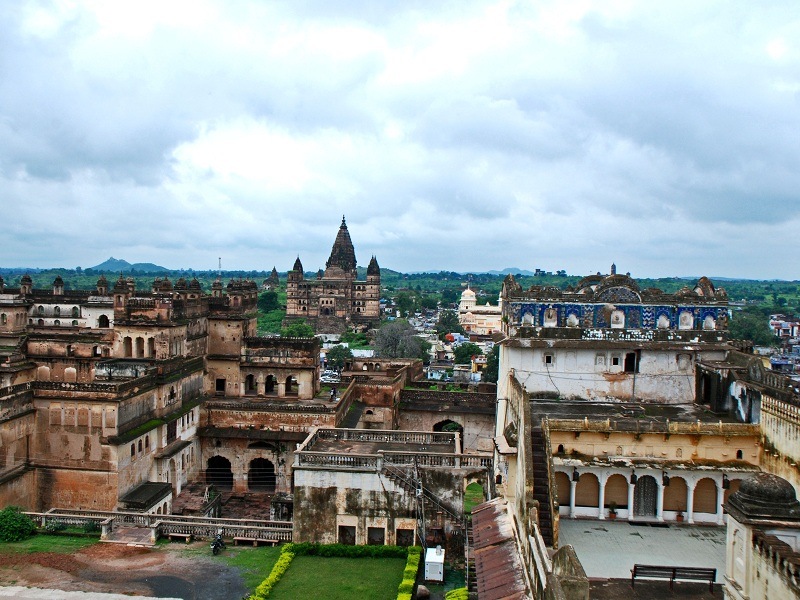 At a distance of 16 km from Jhansi, 123 km from Gwalior, 174 km from Khajuraho, 237 km from Kanpur, 253 km from Agra, 326 km from Lucknow, 352 km from Bhopal, 467 km from Jaipur and 456 km from New Delhi, Orchha or Urchha is a small ancient town in Tikamgarh district of Madhya Pradesh, India. It is one of the popular tourist places in Madhya Pradesh, and among the must include places in India tour packages.

Orchha, means a 'hidden place', is situated on the banks of Betwa River and is blessed with an abundance of natural beauty. It is one of the popular heritage places to visit near Kanpur and Gwalior. Orchha was established in 1501 AD by Bundela king Rudra Pratap Singh, who became the first emperor of Orchha, (1501-1531) and also built the Orchha Fort, must visit places as part of Orchha tour packages. Since then the town has witnessed many battles and conflicts. Raja Jujhar Singh was a monarch of Orchha who fought against the Mughal emperor Shah Jahan in the 17th century. After this defeat, the Bundela rulers moved their capital from Orchha to Tikamgarh in 1783 AD. Finally after independence, Orchha became a part of the State of Madhya Pradesh from the year 1956.

The main attraction of Orchha is the Orchha fort complex, located on an island of River Betwa. The fort complex includes Jahangir Mahal, Raj Mahal & Rai Parveen Mahal. Besides Orchha Fort, Chaturbhuj Temple, Chhatris, Lakshmi Narayan Temple and Orchha Wildlife Sanctuary are some of the famous places to visit in Orchha. Rafting and Boating in Betwa River is one of the most popular things to do in Orchha besides sightseeing. There are many fairs and festivals are celebrated in Orchha. Ram Navami, Dussehra and Diwali are some of the festivals in Orchha that are celebrated with lots of enthusiasm.

Rajmata Vijaya Raje Scindia Airport, Gwalior is the nearest airport which is about 175 km from Orchha. It has direct flights from New Delhi. Jhansi Railway Station, about 16 km from Orchha, is the nearest railhead and is well connected by trains with Bangalore, Chennai, Lucknow, Shirdi, Mumbai, Delhi, Bhopal, Allahabad, Hyderabad, Surat, Okha, Ujjain, Indore, Agra, Jammu, Jabalpur, Secunderabad, Trivandrum, Kochi, Nagpur, Haridwar, & Pune. Jhansi is the nearest bus station which is well connected by bus with Jaipur, Kanpur, Bhopal, Lucknow, Gwalior, and Khajuraho. One can hire a taxi or auto to reach Orchha from Jhansi.

The best season to visit Orchha is from October to March while the peak season is from November - January. The temperature remains comfortable and is apt for visiting the tourist places in Orchha.

How to Reach Orchha - Full Details

Top 10 Places to Visit in Orchha

At a distance of 16 km from Jhansi, Orchha Fort is a medieval fort situated on the seasonal island of Betwa River in Orchha. It is one of the popular forts in Madhya Pradesh and also the prime places to visit in Orchha.

The fort was built by Rudra Pratap Singh, a Bundela Rajput king, in 16th century. The palaces and temples within the fort complex were built over a period of time by successive Maharajas of Orchha State. The fort palaces showcase a supreme display of Mughal-influenced Rajput architecture. Raja Mahal, Jahangir Mahal, Rai Parveen Mahal, Phool Bagh and Sheesh Mahal are some noticed structures within the fort complex.

The Raja Mahal or King's Palace construction was started by Raja Rudra Pratap but it was completed by Madhukar Shah, the predecessor of Bir Singh Ju Deo of Orchha in the 17th century. This is a fine example of Mughal architecture with typical stone jali work and multifaced .....

At a distance of 1 km from Orchha Fort, Chaturbhuj Temple is an ancient Hindu temple situated near Ram Raja Mandir in Orchha town of Madhya Pradesh. Known for its marvelous architecture, Chaturbhuj Temple is one of the popular heritage places to visit in Orchha. The temple is under Archaeology Survey of India.

The name Chaturbhuj literally means 'one who has four arms' and it refers to Lord Rama, an incarnation of Lord Vishnu. It is believed to be built by the king of Orchha, Raja Madhukar Shah, between 1558 and 1573. Madhukar Shah built this temple for his wife Rani Ganesh Kuwari who was an ardent devotee of Lord Rama.

The temple was originally meant for Lord Rama that remained in the Ram Raja Temple. According to legend, this temple built after the queen Ganesh Kuwari had a dream where Lord Rama asked her to construct a temple for him. Following the approval to build the Chaturbhuj Temple, the queen went to Ayodhya to obtain an image of Lord Rama that was to be enshrined .....

At a distance of 1 km from Orchha Fort complex, Ram Raja Temple is a prominent Hindu temple situated in Orchha town of Madhya Pradesh. It is one of the top places to visit in Orchha and also one of the popular places of pilgrimage in Madhya Pradesh.

This temple was built by Madhukar Shah in the 16th century, as a palace for his principal queen Ganesh Kuwari. According to legend, this temple built after the queen Ganesh Kuwari had a dream where Lord Rama asked her to construct a temple for him. Following the approval to build the temple, the queen went to Ayodhya to obtain an image of Lord Rama that was to be enshrined in her new temple. However, the construction of the temple was not complete when the idol arrived from Ayodhya. So it was kept in the palace for the time being. When the temple construction was completed, the queen decided to enshrine the idol at the Chaturbhuj Temple but the idol refused to move from the palace. Thus, the palace converted into the temple and Lord Rama .....

At a distance of 2 km from Orchha Fort, Lakshmi Narayan Temple is a huge temple situated in Orchha town of Madhya Pradesh. It is one of the famous historical places to visit in Orchha other than Orchha Fort complex.

The temple is dedicated to Goddess Lakshmi, who is the Hindu goddess of wealth. Built by Bir Singh Deo in 1622, Sri Lakshmi Narayan Temple is one of the three most important temples in Orchha and also an interesting tourist attraction of the place. Within the inner chambers of the temple, Vir Singh made arrangements for offering sacrifices for Lakshmi. But due to inadequate maintenance, the condition of the temple soon worsened. It was reconstructed by Prithvi Singh during 1793.

This temple displays a perfect and unique mix of temple and fort architecture. The structure of the temple is a rectangular one with four multi-faced projecting bastions at its four corners. It has been built with lime mortar and bricks, with slots for cannons used during the wars. The .....

Also known as the Vetravati, the Betwa rises in the Vindhya Range just north of Hoshangabad in Madhya Pradesh and flows north-east through Madhya Pradesh and Orchha to Uttar Pradesh. The challenge of a turbulent current is no less than that of the rough landscapes. Nestled in the lap of lush greenery and massive cenotaphs, Orchha's mighty river Betwa swift right from the Vindhya Range and empties itself into the Yamuna. The river is wide and its placid flow is intermittently broken by Grade I to Grade II rapids and gives another reason to adventure lovers to experience world's most lovable water adventure.

The rafting at Orchha is organised by MP Tourism, and starts from the scenic Kanchan Ghat. MP Tourism organises two river safaris at .....

At a distance of 1.5 km from Orchha Fort, Royal Chhatris or Cenotaphs are the historical monuments situated on the banks of River Betwa in Orchha. These are one of the popular Orchha tourist places and also one of the must visit places in Orchha.

There are fifteen chattris grouped along the Kanchan Ghat of the River Betwa on the south end of Orchha town. These chattris were constructed as a mark of respect for the imperial blue blood of the mighty rulers of Bundelkhand dynasty. These monuments still speak of the ancient rulers, their victories and their stories. The complex includes the Chhatris of Madhukar Shah, Bir Singh Deo, Jaswant Singh, Udait Singh, Pahar Singh & others. A remnant of the glorious rules of the Bundela dynasty, Chhatris with its magical charm allures people through centuries.

These chattris are basically the tombs of Maharajas that have been placed on elevated platforms and supported by pillars. Built in Indo-Mughal style, these three storey buildings .....

At a distance of 1 km from Chhatris and 2 km from Orchha Fort, Orchha Wildlife Sanctuary lies on the banks of Betwa River in Orchha town of Madhya Pradesh. It is one of the most scenic places in Orchha.

The sanctuary gains importance due to few factors, which includes rich wildlife, Betwa River and some dense plantations. Some of the animals found here include Deers, Blue bull, Monkey, Wild pig, Jackal, Nilgai, Sloth Bear and many such species. The place is a delight for bird watchers as there are nearly 200 species of birds. The migratory birds that visit the place include kingfisher, woodpecker, owls, jungle bush quail, black swan and geese.

At a distance of 40 km from Lalitpur, 103 km from Orchha, 105 km from Jhansi, 207 km from Gwalior, 218 km from Bhopal, 227 km from Khajuraho, 293 km from Narsinghpur, 309 km from Jabalpur,334 km from Kanpur, 337 km from Satna, 389 km from Indore, 415 km from Lucknow, and 540 km from Nagpur, Chanderi is a historical town located in the Ashoknagar district of Madhya Pradesh. Positioned beautifully along the River Betwa, it is one of the popular tourist places in India and among the must-include places in Madhya Pradesh tour packages.

Chanderi is a small 11th-century town nestled between Malwa and Bundelkhand in Madhya Pradesh. Surrounded by magnificent hills, forests, and beautiful lakes, Chanderi boasts of a kind of scenic beauty that should be experienced by travellers of all sorts as part of Chanderi tour packages. This small .....