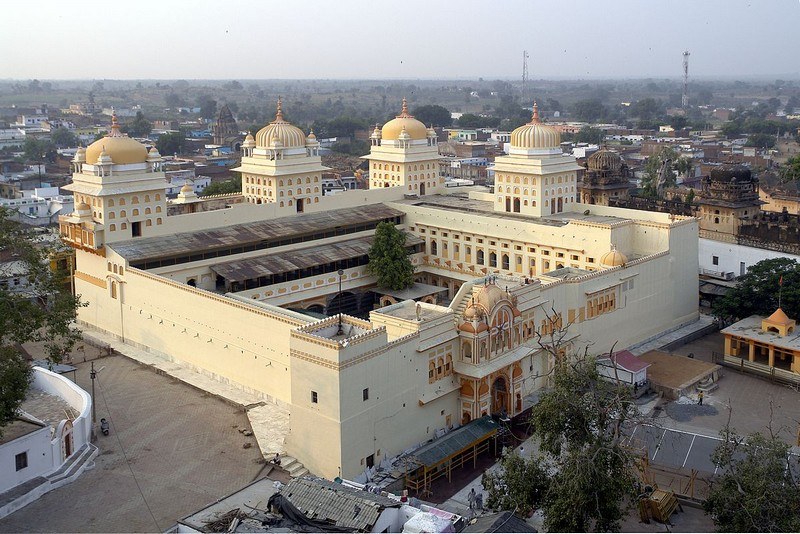 At a distance of 1 km from Orchha Fort complex, Ram Raja Temple is a prominent Hindu temple situated in Orchha town of Madhya Pradesh. It is one of the top places to visit in Orchha and also one of the popular places of pilgrimage in Madhya Pradesh.

This temple was built by Madhukar Shah in the 16th century, as a palace for his principal queen Ganesh Kuwari. According to legend, this temple built after the queen Ganesh Kuwari had a dream where Lord Rama asked her to construct a temple for him. Following the approval to build the temple, the queen went to Ayodhya to obtain an image of Lord Rama that was to be enshrined in her new temple. However, the construction of the temple was not complete when the idol arrived from Ayodhya. So it was kept in the palace for the time being. When the temple construction was completed, the queen decided to enshrine the idol at the Chaturbhuj Temple but the idol refused to move from the palace. Thus, the palace converted into the temple and Lord Rama is worshipped as a king.

Also known as Orchha Temple, Ram Raja Temple has a serene architecture, adorned with a marble courtyard and colourful walls. The specialty of this temple is that Lord Rama has a sword in his right hand and a shield in the other. Lord Rama is sitting in Padmasana posture accompanied by Sita, brother Laxman, Sugreev, Narsingh Bhagwan, Hanuman and Jambavant. It is believed when visiting the Raja Ram Darbar if worshippers look at the left foots thumb then their wish gets fulfilled. Spotting the left foots thumb on Lord Ram's idol is not easy, one should not look down since the left leg is folded, instead one should look close to Lord Ram's right hand.

In India, this is the only temple where Lord Rama is worshiped as a king and that too in a palace. The Aarti is as grand as the temple itself. A Guard of Honour is held every day evening, police personnel have been designated as Guards at the temple, much in the manner of a king and the offerings of Lord Ram are also provided as a royal feast. It is one of the best ceremonial sights to behold. On Hindu festivals like shivratri, kartik purnima, vasant panchami, makar sankaranti, ramanavami, kartik purnima and vivaha panchami, the temple receives devotees in large numbers.