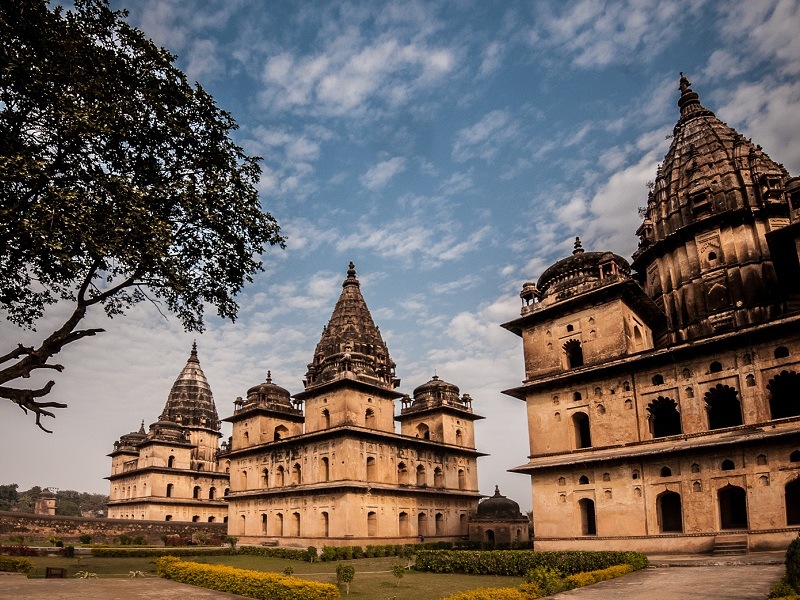 Place Location: On The Banks Of River Betwa

At a distance of 1.5 km from Orchha Fort, Royal Chhatris or Cenotaphs are the historical monuments situated on the banks of River Betwa in Orchha. These are one of the popular Orchha tourist places and also one of the must visit places in Orchha.

There are fifteen chattris grouped along the Kanchan Ghat of the River Betwa on the south end of Orchha town. These chattris were constructed as a mark of respect for the imperial blue blood of the mighty rulers of Bundelkhand dynasty. These monuments still speak of the ancient rulers, their victories and their stories. The complex includes the Chhatris of Madhukar Shah, Bir Singh Deo, Jaswant Singh, Udait Singh, Pahar Singh & others. A remnant of the glorious rules of the Bundela dynasty, Chhatris with its magical charm allures people through centuries.

These chattris are basically the tombs of Maharajas that have been placed on elevated platforms and supported by pillars. Built in Indo-Mughal style, these three storey buildings are open to all sides and have nicely designed domes or pinnacles. Cenotaph of Bir Singh Deo is the most popular of all because of its unique architecture and beautiful design. The domes of the cenotaphs are painted marvelously, which gives it an enchanting look.

The magnificence of the Chhatris can be best viewed from the narrow bridge, where one can see the full reflection of the amazing structure on the cool river water.