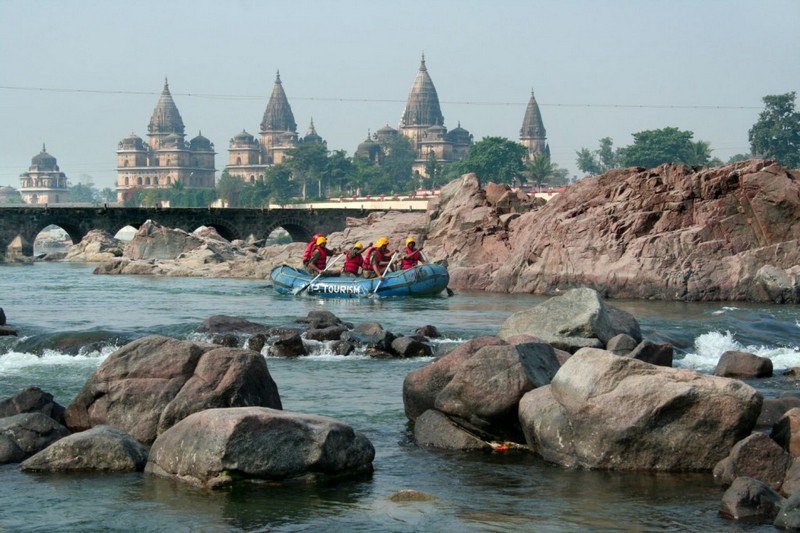 Also known as the Vetravati, the Betwa rises in the Vindhya Range just north of Hoshangabad in Madhya Pradesh and flows north-east through Madhya Pradesh and Orchha to Uttar Pradesh. The challenge of a turbulent current is no less than that of the rough landscapes. Nestled in the lap of lush greenery and massive cenotaphs, Orchha's mighty river Betwa swift right from the Vindhya Range and empties itself into the Yamuna. The river is wide and its placid flow is intermittently broken by Grade I to Grade II rapids and gives another reason to adventure lovers to experience world's most lovable water adventure.

The rafting at Orchha is organised by MP Tourism, and starts from the scenic Kanchan Ghat. MP Tourism organises two river safaris at Orchha. Tickets are arranged by MP tourism and are available at the Betwa retreat or at the Hotel Sheesh Mahal. Beginning from the scenic Kanchan Ghat, the 90-min package (31/2 km) culminates at Shiv Ghat with refreshments. The 3 hour package (6 km) includes breakfast or lunch at Shiv Ghat and goes up to Note Ghat.

Rafting charges vary depending on the season and group size. The usual charges for 8 km rafting stretch cost between Rs. 800-2000 per person. Rafting is closed during monsoons.