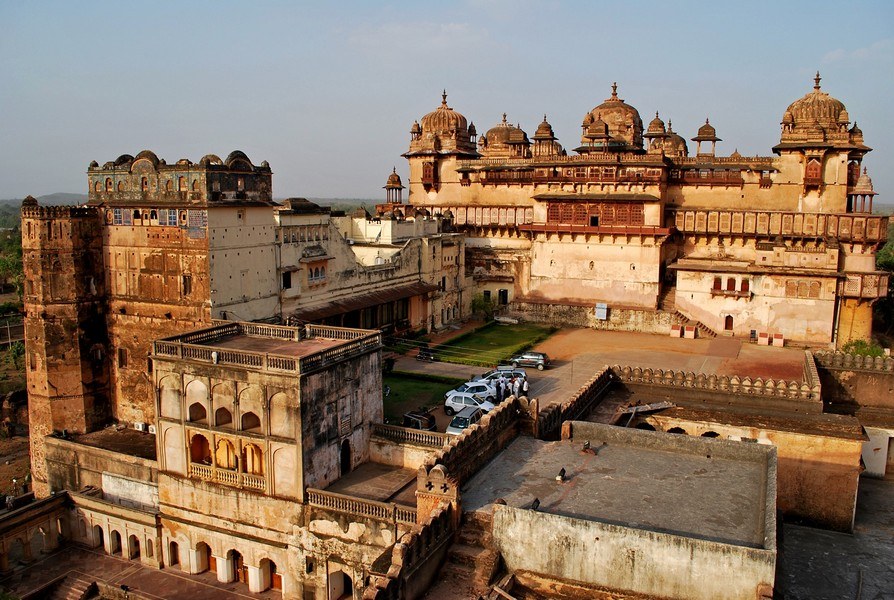 Travel Tips: The same ticket is applicable for all the monuments in Orchha including Chaturbhuj Temple, Ram Raja Temple, Laxminarain temple & Cenotaphs.

At a distance of 16 km from Jhansi, Orchha Fort is a medieval fort situated on the seasonal island of Betwa River in Orchha. It is one of the popular forts in Madhya Pradesh and also the prime places to visit in Orchha.

The fort was built by Rudra Pratap Singh, a Bundela Rajput king, in 16th century. The palaces and temples within the fort complex were built over a period of time by successive Maharajas of Orchha State. The fort palaces showcase a supreme display of Mughal-influenced Rajput architecture. Raja Mahal, Jahangir Mahal, Rai Parveen Mahal, Phool Bagh and Sheesh Mahal are some noticed structures within the fort complex.

The Raja Mahal or King's Palace construction was started by Raja Rudra Pratap but it was completed by Madhukar Shah, the predecessor of Bir Singh Ju Deo of Orchha in the 17th century. This is a fine example of Mughal architecture with typical stone jali work and multifaced arches at the entrance. The palace is in the shape of a perfect square that is further divided into two courtyards. The main courtyard is flanked by multi storeyed apartments on all sides. The Raja Mahal's facade is simplicity personified with hardly any ornamental detailing, but the interior chambers of the palace are elaborately decorated with murals of social and religious themes of gods, mythical animals and people.

The Jahangir Mahal was built by Raja Bir Singh Ju Deo in the 17th century to commemorate the visit of Emperor Jahangir to Orchha. The palace is built in four levels with elegant architectural features of both Muslim and Rajput architecture. Its layout is a symmetrical square built in the inner courtyard of the fort and has eight large domes. It has a plethora of rooms with arcaded openings, projecting platforms and windows with lattice design work. The entrance of the palace is noticeable by traditional and artistic gateway. The front wall of the palace is covered with turquoise tiles and faces to the east. The palace also houses a small archaeological museum.

Rai Parveen Mahal, another imposing structure in the fort complex, was constructed in 1618 by Indrajeet Singh. This mahal was built for the admiration of Rai Parveen, also known as the 'Nightingale of Orchha'. She was well known for her beauty and her passion for poetry and music. The palace is a simple structure just outside the Jahangir Mahal. The key attraction of Rai Parveen Mahal is portraits of different dancing postures of Rai Parveen along with the posture of king Indrajeet with riding a horse.

Sheesh Mahal is flanked on either side by the Raja Mahal and the Jahangir Mahal. This has royal accommodation, which was built for king Udait Singh. It has now been converted into a hotel. Phool Bagh is an elegantly laid out garden in the fort complex which has a line of water fountains that terminates in a palace-pavilion which has eight pillars. Below this garden is an underground structure which was used by the royalty as a cool summer retreat.