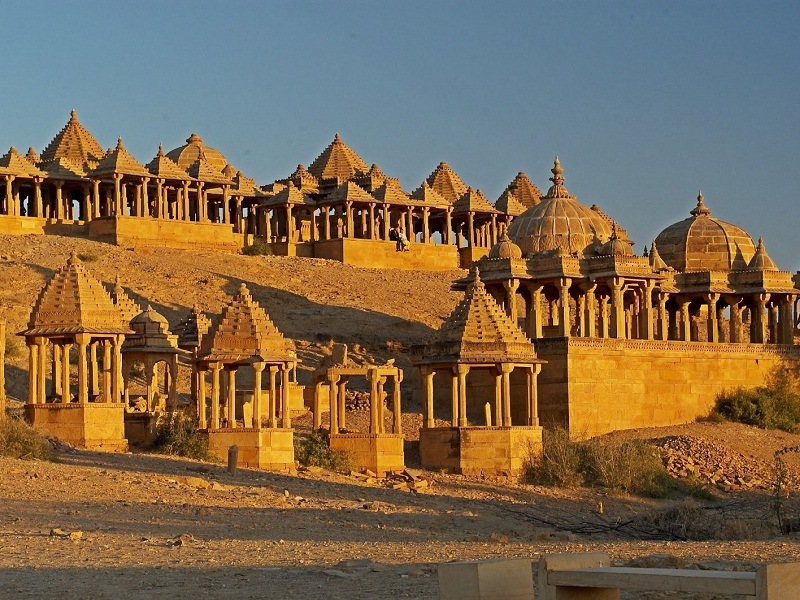 Bada Bagh means big garden. It is a garden of cenotaphs or chhatris of the royal family of Jaisalmer. A descendant of Maharawal Jaisal Singh, Jait Singh II, commissioned a dam to create a water tank in the 16th century AD. This made the desert green in this area. After his death, Bada Bagh was fully developed by his son Lunakaran.

The garden stands at the foot of a hill and several chhatris or cenotaphs stand in memory of the late rulers of Jaisalmer. Cenotaphs are also known as chhatris and one cenotaph is erected for each ruler. The cenotaph of Maharawal Jait Singh is the oldest of all. Many cenotaphs were built by subsequent rulers for the Bhatti royal family of Jaisalmer. This continued till the 20th century when the last one for Maharawal Jawahar Singh was left incomplete as his son who ascended the throne after him, died within one year of his ascension. This was considered to be bad luck and from then on, the tradition of cenotaphs at Bada Bagh was discontinued.

The architecture of these chhatris is a blend of Paliwal, Mughal, and Rajput styles of architecture. Each cenotaph contains inscribed tablets with names of the King and Queen. Some of the cenotaphs have a statue of the King on a horse along with his queen standing nearby. The size of the chhatri varies according to the status of the person.

This garden also includes a tank and a dam, along with a Govardhan Stambh (pillar). The pillar was constructed for commemorating the construction of the nearby tank and dam. Locals refer to the dam as Jait Bandh, while the tank is known as Jait Sar. The Jait Bandh is a huge structure measuring over 1,200 feet in length and 350 feet in width. Both the tank and dam has been constructed using solid blocks of stone.