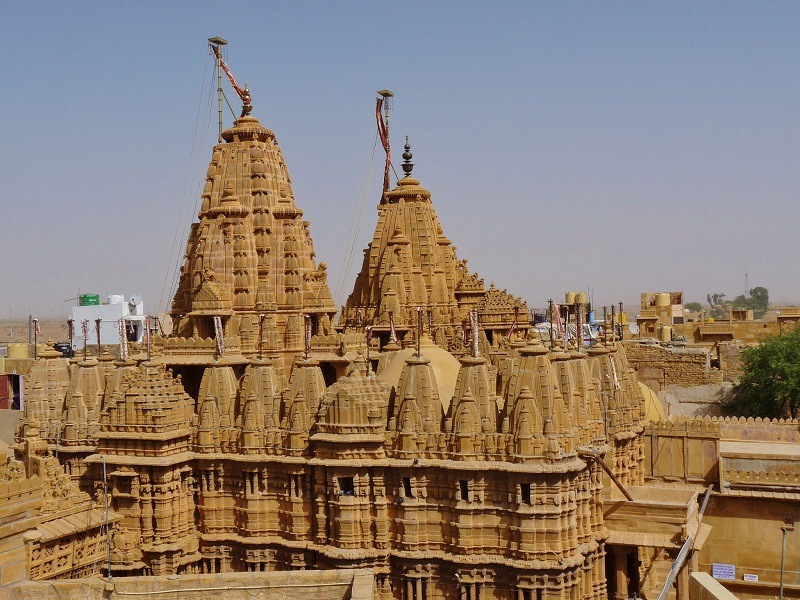 #4 of 19 Places to Visit in Jaisalmer

At a distance of 2 km from Jaisalmer Railway Station, the Jain Temples are one of the oldest temples in Jaisalmer which are situated inside the Jaisalmer Fort complex. These Jain temples are the most important religious attractions in Jaisalmer.

There are seven Jain temples in total which are built during the 12th and 15th centuries AD. These Jain temples are dedicated to different Jain Tirthankaras. Among these temples, the biggest one is the Parsvanath Temple and is most attractive; others being Chandraprabhu temple, Rishabdev temple, Shitalnath Temple, Kunthanath Temple, and Shantinath Temple.

These temples are famous for their Dilwara style paintings and architecture that were predominant in the medieval era. The temples are built out of yellow sandstone and have intricate engravings on them. These temples have archaeological and religious significance attached to them. A huge chain of corridors connecting all the seven temples with numerous captions and stone sculptures is one of the key features of this religious place.

Chandraprabhu temple is dedicated to the eighth tirthankara and is the first temple to be entered while part of Jaisalmer sightseeing tour. It was built in 1509 and features fine sculpture in the mandapa, the intensely sculpted pillars of which form a series of toranas. To the right of Chandraprabhu is the tranquil Rishabdev temple, with fine sculptures around the walls, protected by glass cabinets and pillars beautifully sculpted with apsaras and gods.

Behind Chandraprabhu temple is Parsvanath temple and is dedicated to Jain tirthankara Sri Parsvanath. A door to the south leads to small Shitalnath, dedicated to the 10th tirthankara, whose image is composed of eight precious metals. A door in the northern wall leads to the enchanting, dim chamber of Sambhavanth. Kunthanath Temple is the most famous of seven temples in the fort complex. The Kunthanath temple is almost a replica of the temple in Hastinapur, which is the birthplace of Lord Kunthanath. The architecture and intricate carvings of the temple are the main draw here.

The 16th-century Shantinath temple is one of seven Jain temples within the Golden Fort. It was built in 1536 AD and is dedicated to Sri Shantinath. The beautiful idol of the saint has been majestically carved. The temple is known for its architecture and religious significance. This complex also has a Gyan Bhandar Library which is the best place to get rare manuscripts in India. Travellers can take a rickshaw or shared auto-rickshaw inside the fort for visiting these temples.