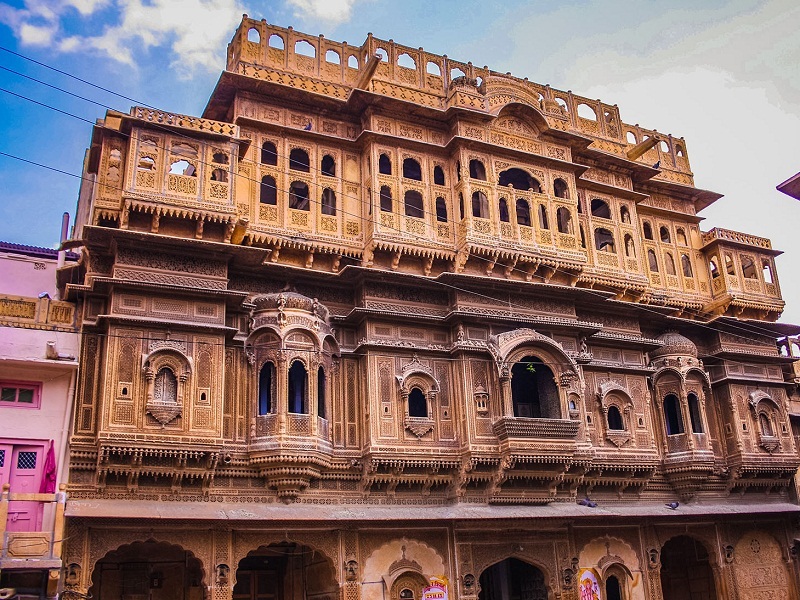 At a distance of 500 m from Jaisalmer Fort and 2 km from Jaisalmer Railway Station, Nathmalji ki Haveli is a renowned architectural marvel in the heart of Jaisalmer near Patwon ki Haveli. It is one of the prominent Jaisalmer places to visit.

Nathmalji ki Haveli was constructed by Maharawal Berisal in 1885 CE, to serve as the residence of Diwan Mohata Nathmal, the then Prime Minister of Jaisalmer. The chief architects of this haveli were two brothers, named Hathi and Lulu. There is a very interesting story regarding its construction. It is believed that both the brothers started building the facets of the haveli simultaneously. The two sides are similar, but not identical.

This haveli is famous for its architecture that reflects the fusion of both Rajput and Islamic styles. The building is planned around two courtyards; the one in the front is much smaller than the rear one. The front part of the building is three storeys high and has the main living quarters. The rear portion is two storeys high and contains the ancillary accommodation.

The facade of this haveli includes birds, elephants, flowers, bicycle, steam engine and soldiers. The entrance of the haveli is guarded by two huge elephants carved from yellow stone. The intricately carved jharokha windows and balconies are examples of the illustrious craftsmanship of Muslim silavats who created poetry in stone at the wondrous Nathmalji ki Haveli. In fact the stone-carved screen windows at the Nathmalji ki Haveli are famous for resembling magnified pieces of intricately carved jewelry. In addition to this, there are many pictures engraved on the walls including that of cattle, horses and flowers.

Tourists can either walk or take a rickshaw to reach this haveli.