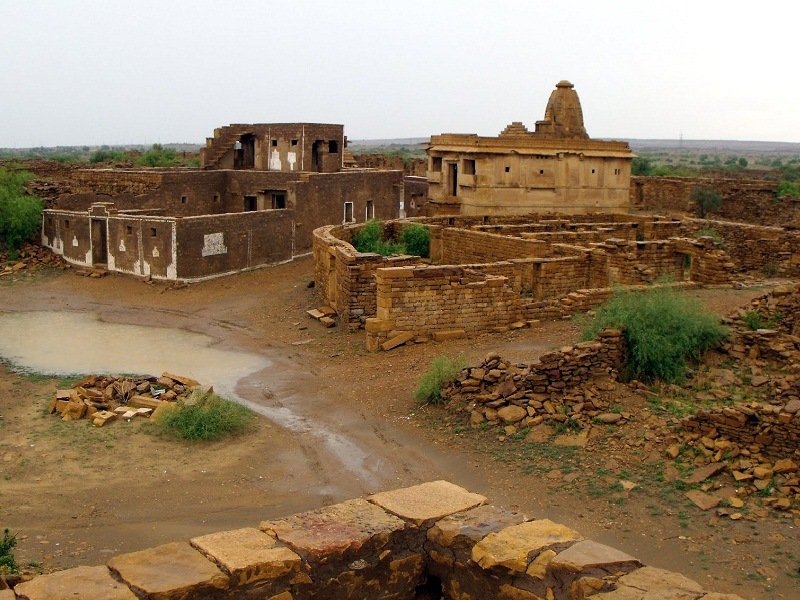 At a distance of 21 km from Jaisalmer, Kuldhara is an abandoned and cursed village in the Jaisalmer district of Rajasthan, India. This is one of the haunted places in Rajasthan and also one of the famous tourist places in Jaisalmer.

Established around 13th century CE, it was once a prosperous village inhabited by Paliwal Brahmins who had migrated from Pali to Jaisalmer region. It is believed that all the residents of Kuldhara village and nearby 83 villages abandoned their homes overnight in 1825 AD possibly because of dwindling water supply, or as a local legend claims, because of persecution by the Jaisalmer State's minister Salim Singh.

According to legend, Salim Singh was the Diwan of Jaisalmer who was known for dissipation. He set eyes on the beautiful daughter of the chief of the village. He also told the villagers of Kuldhara that if his wish wasn't fulfilled, he would levy heavy taxes on them. Brahmins were very staunch towards their principles. Fearing the Salim Singh, instead of giving their daughter, the villagers left their homes and their belongings and ran away to a place which no one knows till date. But before leaving, they cursed the place that no one would be able to live there again. Till this day, the village remains abandoned and no one really spends a night here.

Gradually, it acquired reputation as a haunted site, and the Rajasthan State Government decided to develop it as a tourist spot. Ruins of 410 buildings can be seen in the village now. A team from Delhi's Paranormal Society once decided to find out if this place is indeed haunted and spent close to 12 hours in Kuldhara at night. With their gadgets and equipment, they did spot unusual activity in the village. Many of them felt someone tapping their shoulder when there was no one around. Some spirits even revealed their names and they saw shadowy figures and movements.

The ruins of Kuldhara are a fine example of the architectural excellence of that era and draw photographers and movie-makers to their narrow lanes. On reaching this village, one will be welcomed by a sand stone gate built just before the village was abandoned. Wide dusty roads and sand stone houses on either side of roads depict the architectural marvel of the Paliwal Brahmins. Few houses have been restored and these restored houses display courtyards, kitchen, along with other rooms. The Kuldhara village also has temples. Today, the village is a protected monument under the authority of the Archaeological Survey of India (ASI).