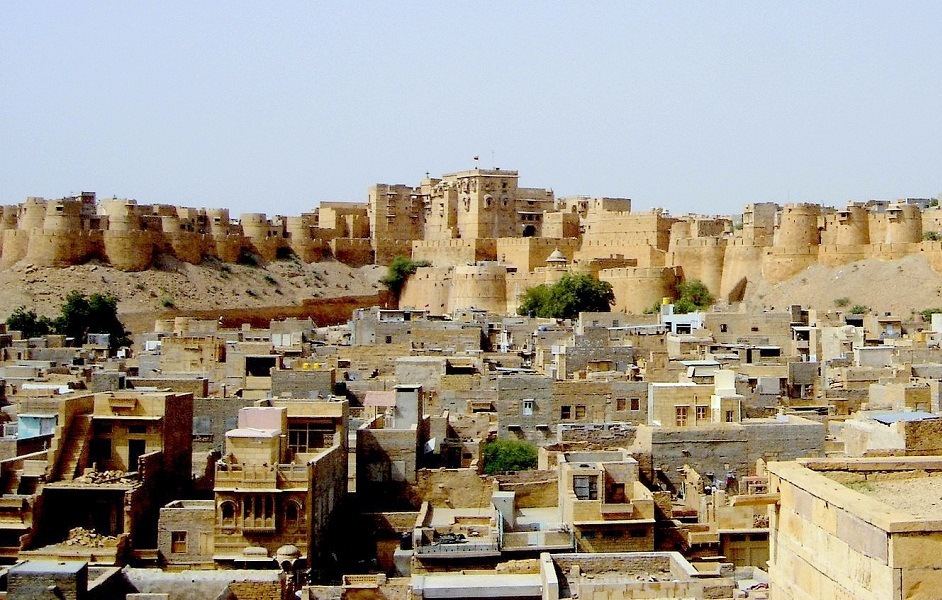 At a distance of 278 km from Jodhpur, 329 km from Bikaner, 493 km from Udaipur, 538 km from Ahmedabad, 555 km from Jaipur, and 762 km from Delhi, Jaisalmer is a city in the Indian state of Rajasthan. Lies in the heart of Thar Desert, it is one of the most visited Rajasthan tourist places, and among the prominent heritage destinations in India.

Jaisalmer is the largest district in Rajasthan and shares an international border with Pakistan. Jaisalmer is popularly called the 'Golden City of India' because the yellow sand and the yellow sandstone used in the architecture of the city provide a golden glow to the city. Jaisalmer is named after Maharawal Jaisal Singh, a Rajput king who founded the city in 1156 AD. The ruling dynasty is believed to have descended from the Yadava Prince Lord Krishna. Jaisalmer is one of the top heritage sites near Delhi.

Jaisalmer is also quite famous for royal forts, havelis, palaces, museums, and temples that can be visited as part of Jaisalmer tour packages. The Pride of Jaisalmer, the Jaisalmer Fort or Sonar Quila is the most famous tourist attraction of Jaisalmer and is a World Heritage Site. Nathmalji ki Haveli, Salim Singh ki Haveli, Patwon ki Haveli, Manak Chowk, Jaisalmer Folklore Museum, Tazia Tower, Gadisagar Lake, Bada Bagh, Khuri Sand Dunes, Sam Sand Dunes, and Kuldhara are some of the popular places to visit in Jaisalmer.

Jaisalmer attracts a lot of tourists for its desert camel safari. A bumpy ride on a camel in the Thar Desert is one of the exciting things to do in Jaisalmer. Sam Sand Dunes and Khuri Sand Dunes are the popular dunes in Jaisalmer. Jaisalmer Desert Festival, a music festival typically held in the 2nd week of February is also hosted near Sam Sand Dunes. Jaisalmer is also known for various crafts such as silver jewellery, embroidery, stone, work, leather products, and printing work.

Jaisalmer Airport is a military airport and supports only chartered flights, hence is sparingly used by travellers. Jodhpur Airport is the closest domestic airport which is about 281 km from Jaisalmer. Jaisalmer Railway Station is well connected by train with Jodhpur, Kathgodam, Ramnagar, Howrah, Delhi, Mumbai, and Jaipur. Jaisalmer Bus Stand, about 1.5 km from Railway Station, has frequent bus connectivity with Jodhpur, Bikaner, Ahmedabad, Jaipur, Udaipur, and Ajmer.

The best time to visit Jaisalmer is from October to February while the peak season is from December to February. Summers are hot & dry and monsoon & winter offer pleasant weather to enjoy the golden city.

How to Reach Jaisalmer - Full Details

Top 10 Places to Visit in Jaisalmer

#1 of 19 Places to Visit in Jaisalmer

At a distance of 1.5 km from Jaisalmer Railway Station, Jaisalmer Fort locally known as Sonar Quila (Golden Fort) is located in the heart of Jaisalmer city. It is one of the largest forts in India, and among the must include places in Jaisalmer holiday packages.

Jaisalmer Fort is a World Heritage Site declared by UNESCO under the group hill forts of Rajasthan. Jaisalmer Fort was built atop the Trikuta Hill in 1156 AD by the Bhati Rajput ruler Maharawal Jaisal Singh. It was the center of several historical encounters between the Bhattis, Mughals, and Rathores of Jodhpur. The Fort of Jaisalmer survived several attacks by the Muslim rulers like Aladdin Khilji and Mughal Emperor Humayun. The city also served as a refuge and way-station for caravans and travelers along the Silk Road.

Standing proudly in the middle of the great Thar Desert, this fort is regarded as 'The Pride .....

#2 of 19 Places to Visit in Jaisalmer

At a distance of 40 km from Jaisalmer, Sam Sand Dunes are situated at the edge of Jaisalmer Desert National Park in Rajasthan. Lies in the midst of the Thar Desert, these sand dunes are amongst the most popular places to experience Rajasthan Tourism, and also one of the prime places to visit during Jaisalmer tour.

Sam has a truly magnificent stretch of sweeping dunes, with sparse or no vegetation. The 3 km long, and 1 km wide sand dunes reflect the true image of Rajasthan. Undeniably one of the most picturesque spots in the desert, the Sam Sand Dunes have gained a tremendous tourist reputation over time. The unrelieved ocean of sand constantly changes its appearance at every gentle gush of wind. The whirling air currents of this area match with those of the sandstorms in the Sahara.

Camel Safari at Sam Sand Dunes is one of the top things to do in Jaisalmer. The .....

#3 of 19 Places to Visit in Jaisalmer

The Patwon ki Haveli is considered to be the one of the largest as well as the finest haveli of Rajasthan. This haveli is essentially a cluster of five havelis, which was constructed in 1805 CE by Guman Chand Patwa. A rich trader, Guman Chand Patwa constructed five separate sections for his five sons. The first haveli is the main and also the grandest haveli in the complex. The entire construction took over 55 years to complete.

Located in the center of the city, it is truly an outstanding piece of architecture. It is renowned for its ornate wall paintings, intricate yellow sandstone-carved jharokas or balconies, gateways .....

#4 of 19 Places to Visit in Jaisalmer

At a distance of 2 km from Jaisalmer Railway Station, the Jain Temples are one of the oldest temples in Jaisalmer which are situated inside the Jaisalmer Fort complex. These Jain temples are the most important religious attractions in Jaisalmer.

There are seven Jain temples in total which are built during the 12th and 15th centuries AD. These Jain temples are dedicated to different Jain Tirthankaras. Among these temples, the biggest one is the Parsvanath Temple and is most attractive; others being Chandraprabhu temple, Rishabdev temple, Shitalnath Temple, Kunthanath Temple, and Shantinath Temple.

These temples are famous for their Dilwara style paintings and architecture that were predominant in the medieval era. The temples are built out of yellow sandstone and have intricate engravings on them. These temples have archaeological and religious .....

#5 of 19 Places to Visit in Jaisalmer

The Gadisar Lake was constructed by Raja Rawal Jaisal, the first ruler of Jaisalmer, and later reconstructed by Maharawal Gadsi Singh in the year 1367 AD. It is said that this rainwater lake once provided water to the entire town. At present Gadisar Lake gets water from Indira Gandhi Canal so it never dries.

Located towards the south of Jaisalmer city, the entrance to the Gadisar Lake is through a magnificent and artistically carved yellow sandstone archway that is known as the Tilon-Ki-Pol. There are numerous shrines and small temples on the embankment of this lake which can visit during your trip to Jaisalmer. The .....

#6 of 19 Places to Visit in Jaisalmer

The Desert National Park was established in 1980, and it depicts the ecosystem of the Thar Desert. Spread over an area of 3162 sq. km, the park is extensively covered by sand dunes over large extents, and is one of the major Jaisalmer sightseeing places. The main area of the park comprises compact salt lake bottoms, fixed dunes, and craggy rocks. There are many lakes inside the national park including Rajbaugh Lake, Milak Lake, and Padam Talao Lake.

#7 of 19 Places to Visit in Jaisalmer

The museum was established by Mr. N. K. Sharma in the year 1997. The Desert Cultural Centre and Museum exhibits the art, craft and culture of Jaisalmer beautifully. The museum has a large collection of traditional instruments, medieval coins and ethnic artifacts. This is the treasure trove of ethnic Rajasthani jewellery, handicrafts, weapons and fossil works. The museum is maintained by the Tourism Department of Jaisalmer and is a must-visit for history buffs.

Various musical instruments and folk dance related costumes can be found in this museum. Costumes of the erstwhile maharajas and maharanis can also found in the museum. Kitchen tools and culinary tools can be found here, while the Rajasthani arts are presented in the walls, which belonged to painters .....

#8 of 19 Places to Visit in Jaisalmer

At a distance of 8 km from Jaisalmer Railway Station, Lodurva is a village in Jaisalmer district of Rajasthan. Famous for Jain temples and other historical monuments, Lodurva is one of the top places to visit in Jaisalmer.

Lodurva was the ancient capital of the Bhatti dynasty till 1156 AD, when Rawal Jaisal founded the Jaisalmer state and shifted the capital to Jaisalmer. The town of Lodurva is much older than Jaisalmer and was sacked several times, most notably by Mahmud of Ghazni in the 11th century CE and then by Mohammad Ghori in the next century.

Today, it is a popular tourist destination, known for its architectural ruins and Jai temples. The temples at Lodurva exhibit some more fine examples of intricate craftsmanship on yellow stone. The Parshvnath Temple is the oldest and the most beautiful of the Jain temples. The temple is dedicated to 23rd Tirthankara, Parshvnath. The walls of the sanctum .....

#9 of 19 Places to Visit in Jaisalmer

At a distance of 2 km from Jaisalmer Railway Station, Tazia Tower is located in the Badal Palace complex near Amar Sagar Gate inside Jaisalmer Fort. The intricate designs, minarets and architectural fusion of this tower make it one of the top Jaisalmer tourist places.

Tazia Tower was constructed in the form of Tazia that are usually part of Muslim religious festivities. It was constructed in 1886 AD by Muslim carvers who presented it as a gift to the imperial Hindu king, Maharawal Berisal Singh.

The structure is a five-storied complex with each story possessing a unique balcony with an exclusive design of its own. The exquisite design and fine carvings on the walls and ceilings of each floor of the tower reflects the rich artistic creativity and imaginative skills of the local craftsmen of the bygone era.

Bada Bagh means big garden. It is a garden of cenotaphs or chhatris of the royal family of Jaisalmer. A descendant of Maharawal Jaisal Singh, Jait Singh II, commissioned a dam to create a water tank in the 16th century AD. This made the desert green in this area. After his death, Bada Bagh was fully developed by his son Lunakaran.

The garden stands at the foot of a hill and several chhatris or cenotaphs stand in memory of the late rulers of Jaisalmer. Cenotaphs are also known as chhatris and one cenotaph is erected for each ruler. The cenotaph of Maharawal Jait Singh is the oldest of all. Many cenotaphs were built by subsequent rulers for the Bhatti royal family of Jaisalmer. This continued till the 20th century when .....