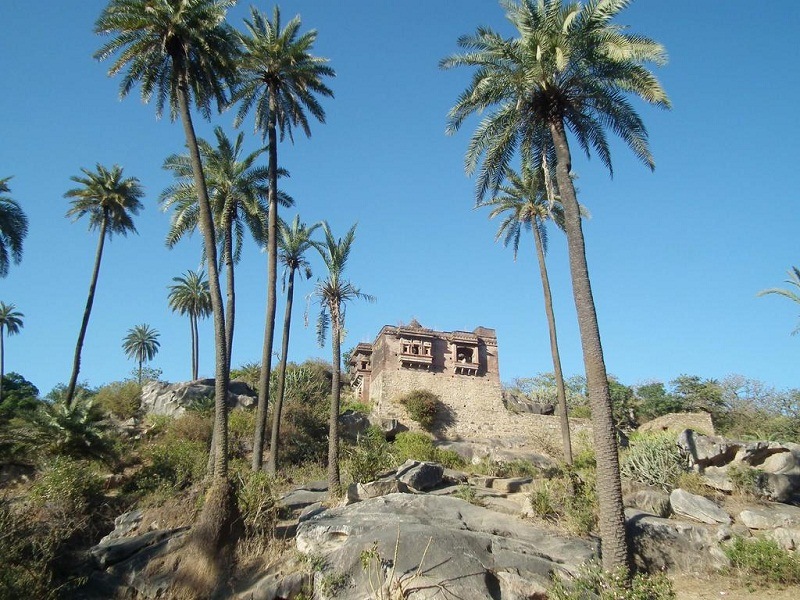 At a distance of 10 km from Mount Abu, Achalgarh Fort is a medieval fort located at Achalgadh village in Sirohi district of Rajasthan. It is one of the Mount Abu sightseeing places.

Achalgarh Fort was originally built by the Paramara dynasty rulers but it was renovated, remodeled and beautified by Rana Kumbha of Mewar in 1452 CE. This structure was built for protecting the region and keeping an eye on the movements of enemies. It is even said that the fort was specially made by Rana Kumbha, who was in charge of numerous huge fortresses in Southern Rajasthan.

Achalgarh Fort is situated at the top of a mountain peak and offers picturesque views. This Fort is surrounded by massive battlement walls and has a very imposing look. The fort is in a dilapidated condition now. The first gate of the fort is known as Hanumanpol, which served as the entrance to the lower fort. It comprises two towers built of large blocks of grey granite. After some ascent, stands Champapol, the second gate of the fort, which served as the entrance to the inner fort.

Religious significance also makes Achalgarh Fort important owing to the renowned Achaleshwar Mahadev Temple situated just outside the fort, along with the Jain temples which were built in 1513 CE within the fort premises. The main deity in Achaleshwar Mahadev Temple is Lord Shiva and the locals believe that there are footprints of the deity on the holy rock. The Achaleshwar Temple is also well-known for containing a Nandi idol that is said to be made of 5 metals, namely, gold, silver, copper, brass and zinc and weighs more than 4 tons. The entire temple is made up of marble blocks, with ancient poems carved on them. Near the temple, there are three stone buffaloes standing around a pond.

Achalgarh Fort is an impressive fort also with some beautiful Jain temples enclosed within. Among these temples, the Kantinath Jain Temple is the best as it offers a great sight. These temples were built in 1513 CE. Within the fortress there also is the Dashavtaar Temple. This temple entrance is like a canopy with hundreds of sculptured statues, portraying various dance forms of the era. Both the temples of Achalgarh show the masterpieces and capabilities of the artisans of the bygone era.

There is also a beautiful Mandakini Lake amidst the rocky hills which is a popular tourist spot. Many images of the Rajput rulers and animals are found drawn on the rocks surrounding the lake.