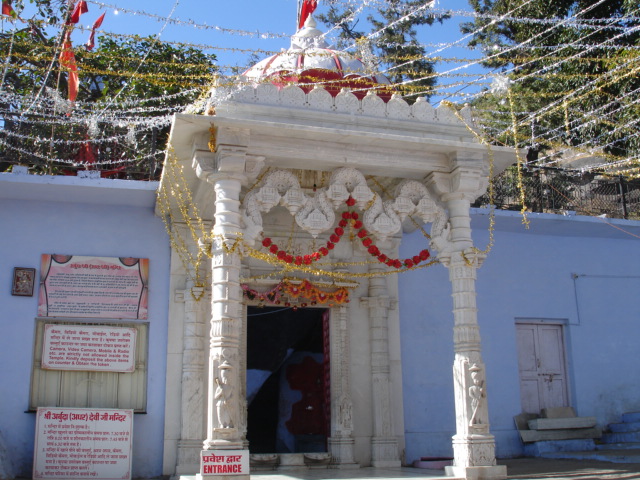 At a distance of 1.8 km from Nakki Lake and 3 km from Mount Abu Bus Station, Adhar Devi Temple, also known as Arbuda Devi Temple is a Hindu temple situated on a hill in Mount Abu. It is one of the top places to visit in Maunt Abu.

Adhar Devi Temple is located among beautiful caves on the mountains of Aravalli hills. The temple is dedicated to Goddess Durga. The temple was named after the 'Adhar' of the Goddess Durga, which fell at the site and was found hanging in mid-air. The temple has full of exquisite idols and sculptures, which make it worth visiting.

This cave-temple is located inside a rocky cleave and can be reached through a flight of 365 stairs, which has been carved in the hill. The inner shrine is reached by crawling a narrow cave. The temple is visited by people in large number during the nine days of the famous festival 'Navratri. The scenic beauty amidst which the temple stands is quite breathtaking. The entire Mount Abu town is visible from the top.

Doodh Baori, a sacred well having milk coloured water, is situated near the Adhar Devi Temple. This well is the main source of water for the temple and it is commonly believed that the water has some heavenly powers. Local inhabitants consider this well as a form of Kamadhenu, which symbolizes a cow.

The climb up to the Adhar Devi temple can be a difficult one so it is not recommended for old people.