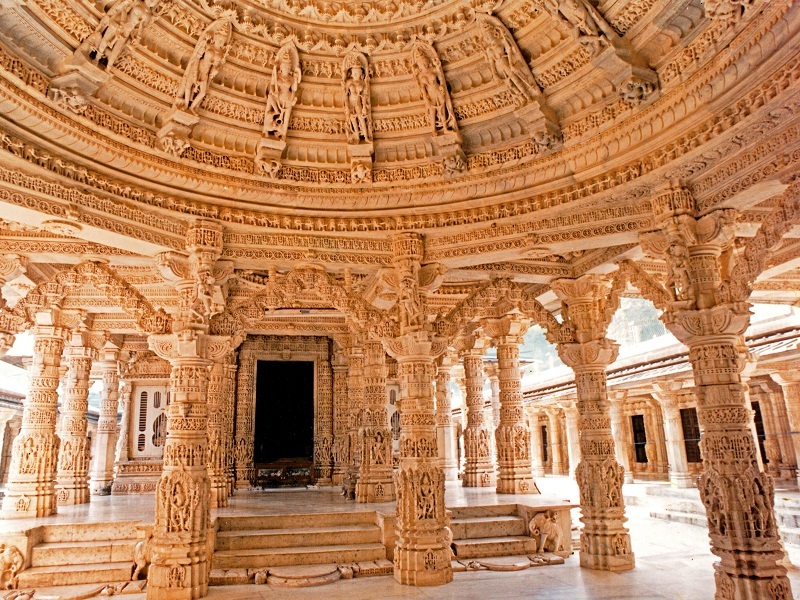 At a distance of 3 km from Mount Abu Bus Station, Dilwara Temples are the group of five Jain temples situated at Dilwara in Rajasthan. These are among the best places of pilgrimage in Rajasthan, and among the top Mount Abu places to visit.

Dilwara Temples were built between the 11th and 13th centuries AD and are world-famous for their stunning use of marble. Archaeological evidence suggests that Mahavira himself visited the site, making it sacred to the Jains as a tirtha. These are among the must-visit places as part of Mount Abu packages.

These temples are known for their extraordinary architecture and marvelous marble stone carvings. These temples have an opulent entranceway, the simplicity in architecture reflecting Jain values like honesty and frugality. The temples are in the midst of forested hills. These temples have been named as Vimal Vasahi, Luna Vasahi, Pittalhar, Khartar Vasahi, and Mahavir Swami. Vimal Vasahi and Luna Vasahi are the most famous of the five Jain temples situated in the region.

Vimal Vasahi or Shri Adi Nathji temple is dedicated to the first Jain Tirthankar Lord Rishabha and was constructed by Vimal Shah, the minister of the Chalukya King, Bhimdev I in 1021 AD. It took 14 years to build this temple by 1,500 artisans and 1,200 labourers. Vimal Vasahi has a Gudha Mandap, Navchoki, Rang Mandap, and a circumambulatory corridor having 57 cells. This temple is essentially rectangular in plan and is oriented on the East-West axis with the main shrine facing east. The Rang Mandap is a grand hall supported by 12 decorated pillars and nicely carved out arches with a breathtaking central dome. On the pillars are carved female figurines playing musical instruments and 16 Vidyadevis, or the goddesses of knowledge, each one holding her own symbol. The Hastishala was constructed by Prithvipal, a descendant of Vimalsha in 1147-49 AD.

Luna Vasahi or Shri Neminath temple was constructed for the 22nd Jain Tirthankara, Lord Neminath. It was constructed by two Porwad brothers, Vastupal and Tejpal, during 1230 AD. These two brothers were ministers of a Vaghela ruler of Gujarat and dedicated the temple for their late brother Luna. This temple has one hall named Rang Mandap which has 360 tiny idols of Jain Tirthankaras minutely crafted on marble. The Kirthi Stambha is a big black stone pillar that stands on the left side of the temple. The pillar was constructed by Maharana Kumbha of Mewar.

Pittalhar or Shri Rishabha Dev temple is dedicated to the first Jain Tirthankar Lord Rishabha and was built by Bhima Shah, a minister of Sultan Begada of Ahmedabad. A massive metal statue of the first Tirthankara, Rishabha Dev, cast in five metals, is installed in the temple. The main metal used in this statue is 'Pital' (brass), hence the name 'Pittalhar'. The Shrine consists of a main Garbhagriha, Gudh Mandap, and Navchoki.

Khartar Vasahi or Shri Parshvanathji temple is dedicated to the 23rd Jain Tirthankar Lord Parshvanath. It was built by Mandlik and his family in 1458-59. This temple has the tallest structure along with four big Mandapas amongst all Dilwara temples. Shri Mahavir Swami temple is a small structure constructed in 1582 and is dedicated to Lord Mahavira. This temple is relatively small the temple's upper walls have pictures of the porch painted by craftsmen of Sirohi in the year 1764 CE.