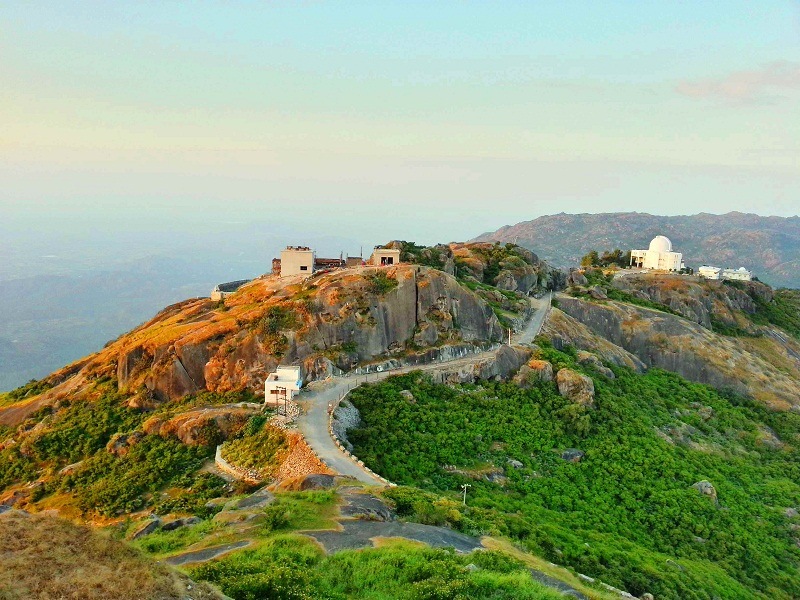 At a distance of 16 km from Mount Abu Bus Station, Guru Shikhar is a mountain peak in the Arbuda Mountains of Rajasthan. It is one of the top places for trekking in Rajasthan, and among the most popular tourist places in Mount Abu.

Guru Shikhar is the highest point of the Aravalli Range. It rises to an altitude of 1,722 m (5,650 feet). Guru Shikhar provides a breathtaking panoramic view of Mount Abu town and the green Aravalli range. According to history, King Prithviraj Chauhan is believed to have travelled along this peak to meet his bride and consummate his marriage with her. The bride was the princess of Prahladanpur, now known as Palanpur. Trekking to this peak is one of the top things to do here as part of Mount Abu tour.

The peak is named Guru Shikhar or 'the peak of the guru' after Dattatreya. The temple of Dattatreya is one of the main attractions at Guru Shikhar peak other than scenic views. Lord Dattatreya is believed to be an incarnation of Lord Vishnu who had taken birth to the sage couple Atri and Anasuya. The word 'Datta' means given and since he was the son of Atri hence named 'Atreya'. Thus the boy got his name Dattatreya and is believed to be born with divine power. It is believed that the lord actually put his foot on this peak sanctifying the place. While visiting, one can see the footprint marks of the Lord in the rocky caves. Thousands of pilgrims visit this holy place every year. A huge bell suspended from a wooden frame having an inscription of 1411 AD can be seen at the entrance of the temple.

Raghunathji Temple is also worth seeing over this place. In this temple, one can find the footprints of Swami Ramanath, who was a famous sage of his time. The temple of Mata Anasuya, mother of Lord Dattatreya, is also a major attraction for devotees. Adjacent to the temple is the Mount Abu Observatory operated by the Physical Research Laboratory. This observatory hosts a 1.2m infrared telescope and also several Astronomy experiments.

Visitors can rent a taxi or take a two-wheeler and travel along the Dilwara-Achalgadh road to reach the base of the mountain. From here, one needs to climb about 300 steps to reach the peak. Although it is a steep climb, the steps are in good condition throughout and can be negotiated with relative ease.