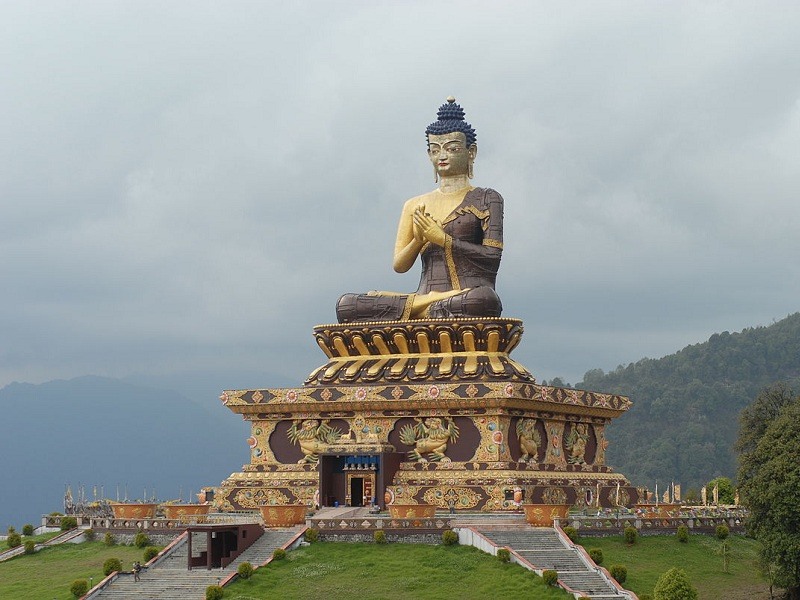 At a distance of 1 km from Ravangla Bus Stand, Buddha Park is a beautiful park located at Ravangla, in South Sikkim district. Also known as Tathagata Tsal, it is one of the well maintained parks in South Sikkim and among the prime places to visit in Ravangla.

The Buddha Park was constructed between 2006 and 2013 which features a 130-foot high statue of the Buddha as its centerpiece. The site was chosen within the larger religious complex of the Rabong Gompa (Monastery), itself a centuries-old place of pilgrimage. On the birth anniversary of Lord Gautama Buddha in 2006, the Sikkim Government took a decision to observe the birth anniversary throughout the year in Sikkim. And as a part of the celebration, Ravangla was chosen to construct and install a large statue of Lord Buddha and eco-garden to commemorate the event.

The statue was consecrated on 25 March 2013 by the 14th Dalai Lama and became a stop on the 'Himalayan Buddhist Circuit'. The giant statue of the Buddha marks the event of the 2550th conception commemoration of Gautama Buddha. The Buddhist Park is a State government venture which was built for boosting pilgrimage tourism. This site is of great spiritual importance and thus even the ambience adds a divine experience to the visitors.

The park area is beautifully landscaped creating ample walkway, gardens and space for visitors to enjoy the serene surroundings. There is a huge Prayer Hall along with a museum and a meditation center. Inside the museum, a spirally constructed gallery demonstrates the life of Gautama Buddha in two different styles. The Cho-Dzo Lake is located within the complex, surrounded by forest.