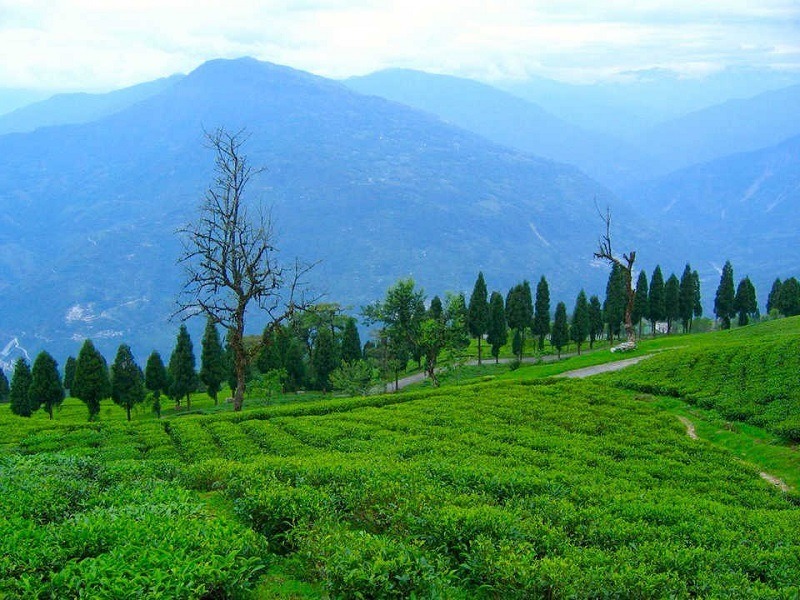 At a distance of 20 km from Ravangla and 55 km from Gangtok, Temi Tea Garden is a beautiful tea garden located in South Sikkim. It is the only tea garden in Sikkim and is considered as one of the best in India.

Covering an area of 440 acres, Temi Tea Garden was established in 1969 CE by Sikkim Government. According to history, the last king of Sikkim initiated tea growing in Sikkim to provide employment for Tibetan refugees fleeing the Chinese invasion of their homeland. Initially a small plantation was started in Kewzing. Later, it was moved to Temi and a proper processing plant was constructed by Sikkim Government.

The tea plants are growing along the steep slopes of the hills emerging from the Tendong Hills ranging from 1200 to 1800 m. The original tea saplings were brought from Darjeeling and it produces some of the best tea in the world. The estate functions under a Tea Board set up by the Government of Sikkim and under its aegis the 'Sang-Martam Tea Growers Cooperative Society' has been established to promote growing of different varieties of quality tea. The Tea Board of India awarded the 'All India Quality Award' to the Temi Tea Garden for two consecutive years of 1994 and 1995.

Temi Tea Estate is the only tea garden existing in Sikkim producing 100 metric ton of tea annually that too using the organic method as per the guidelines of the Institute of Marketecology (IMO) of Switzerland. The tea estate makes news not only for the quantity, but also for its quality, which gets a high recognition in the international markets. The tea produced in this garden is also partly marketed under the trade name 'Temi Tea'. Temi tea is also a common souvenir for tourists visiting the state. The garden has 406 workers supported by a staff of 43 people.

Temi tea garden is located in a blissful mountain side valley that is full of cherry blossom trees and lush ferns. The picturesque view of tea plucking can be seen here during the plucking season. The factory can be visited to have an interesting lesson on tea processing. From the garden, one can get the rewarding views of Mount Khangchendzonga tampered in snow. Enjoy a nature walk along the scenic tea garden, exploring the pristine Himalayan hamlets, birds and butterflies. You can also visit nearby Ravangla to indulge in Maenam Hill trek or trek to Tendong Hill from Damthang.

The best time to visit the garden is from March to May where one can see many spring flowers growing by the side which ornaments the garden even more. The Temi Tea estate even has an old British built bungalow which serves as an accommodation to the tourists visiting the garden.