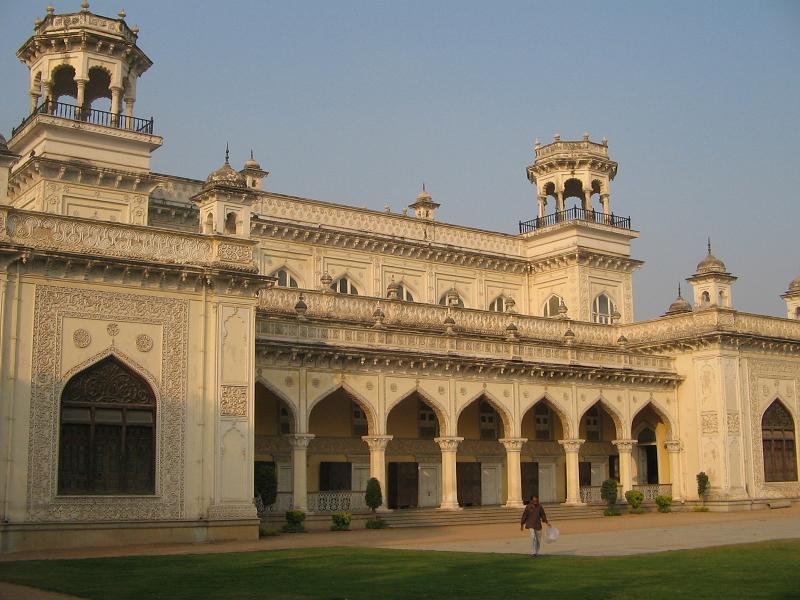 At a distance of 5 km from Nampally Railway Station and 1 km from Charminar, Chowmahalla or Chowmahallat Palace is a magnificent palace belonging to the Nizams of Hyderabad. It is one of the top attractions you must include in Hyderabad packages. The palace was the seat of the Asaf Jahi dynasty and was the official residence of the Nizams of Hyderabad. The palace remains the property of Barkat Ali Khan Mukarram Jah, heir of the Nizams.

The name 'Chowmahallat' comes from two Urdu words, Chow (four) and Mahallat (palaces) means Four Palaces. While Salabat Jung initiated its construction in 1750, it was completed by Asaf Jah V, between 1857 and 1869. Extending from the Laad Bazaar on the north to the Aspan Chowk Road on the south, the palace originally covered 45 acres but only 12 acres remain today. This palace is one of the top tourist places to visit in Hyderabad city. It was the place where the Nizams entertained their official guests and royal visitors.

Chowmahalla Palace is a blend of many architectural styles and influences. The palace is a replica of the Shah's Palace in Teheran, Iran. It consists of two courtyards, southern courtyard and northern courtyard adorned with lawn and fountains. The northern courtyard has been restored and is now open to the public. This courtyard consists of Bara Imam and Shishe-Alat has many Mughal domes and arches adorned with stucco ornamentation. The Southern courtyard, the oldest part of Chowmahalla Palace, consists of Afzal Mahal, Mahtab Mahal, Tahniyat Mahal and Aftab Mahal. Of these the Aftab Mahal is the grandest of them all and is a two storied building with a European facade of Corinthian columns and a parapet without pediment.

Khilwat Mubarak, the heart of Chowmahalla Palace, is the Durbar Hall where religious ceremonies and durbar were held. It has a pure marble platform on which the royal seat 'Takht-e-Nishan' is laid. Khilwat Mubarak is also famous for its 19 chandeliers made of Belgian crystal. The Chowmahalla Palace complex also consists of a 250-year old Clock Tower (Khilwat Clock), Council Hall and Roshan Bungalow. The Council Hall houses a rare collection of manuscripts and priceless books. Today it is the venue for temporary exhibitions from the treasures of the Chowmahalla Palace Collection that offers a glimpse of a bygone era.

The cars and other vehicles used by the royal families of Nizam are exhibited on the rear side of the palace.

The palace is now open to the general public and they can host dinners, meetings as well as cultural evenings can be hosted here. Many corporate also host their annual events in the palace.

Timings: 10 AM to 5 PM. Closed on Fridays and on national holidays.