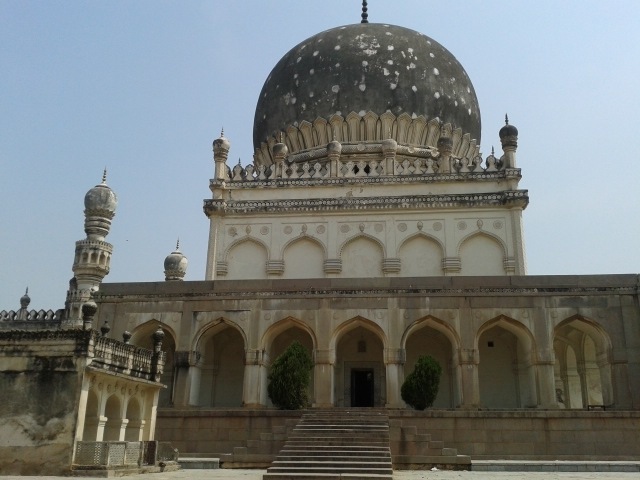 Planned and built by the Qutub Shahis themselves, these tombs are said to be the oldest historical monuments in Hyderabad. The tombs are built in Persian, Pathan and Hindu architectural styles using grey granite, with stucco ornamentation. These tombs are standing at the center of a garden known as Ibrahim Bagh, containing ponds and planted pathways.

There are more than 30 tombs in the enclosure besides some open air tombs. The tombs vary in size from small to large. The tombs are domed structures built on a square base surrounded by pointed arches, each tomb are quadrangular and rise from 9 to 15 meter above the platform. In the center of each tomb is a sarcophagus which overlies the actual burial vault in a crypt below. The domed structure originally overlaid with blue and green tiles, of which only some remain today. Almost all the tombs are surrounded by baluster with beautiful minarets at the corners.

The largest of all Qutub Shahi Tombs is the tomb of Mohammed Quli Qutub Shah, the fifth king of the Qutub Shahi dynasty. This tomb reaching up to a height of about 42 meters has 28 open arches, a large dome and minarets at its corners. The basement of the tomb is open with large pillars and spread with arches supporting the main structure. The tomb chamber is octagonal and the whole structure is crowned by a circular dome. There are three graves in this tomb chamber and 21 on the terrace outside. This tomb was built in 1543 AD.

The tombs were once furnished with carpets and chandeliers. Copies of Quran were kept on pedestals and readers recited verses from the holy book at regular intervals. Golden spires were fitted over the tombs of the sultans to distinguish their tombs from those of other members of the royal family. After the reign of reign of Qutub Shahis, the tombs were neglected, till Salar Jung III ordered their restoration in the early 19th century.

Today, Qutub Shahi Tombs are the venue of the Deccan Festival conducted by the State Government.