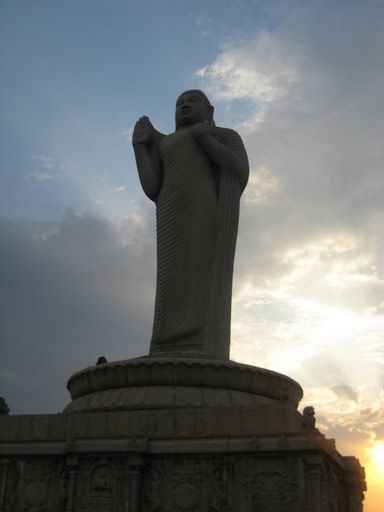 Place Location: In The Middle Of Hussain Sagar

At a distance of 3.5 km from Nampally Railway Station & 0.5 km from Lumbini Park, Buddha Statue has been placed on the rock of Gibraltar in the placid waters of the Hussain Sagar. The Buddha Statue is the world's largest single-stone statue of Buddha with a height of 72 feet (including base) and the weight of 450 tons. This is one of the prime attractions in Hyderabad city.

During his visit to New York, Andhra Pradesh Chief Minister N.T. Rama Rao (1983-89) saw the Statue of Liberty and inspired to build a similar structure of Gautama Buddha in the famous Hussain Sagar Lake. Erected as part of the Buddha Poornima project in 1985, this monolithic statue was erected out of a white granite rock. It was carved by 200 sculptors for two years. After 5 years and the expenditure of $3 million, the statue stood at 58 feet and weighed 350 tons, making it the world's tallest monolithic statue of the Buddha. A concrete platform measuring 14 feet, now referred to as the Rock of Gibraltar, was constructed in the middle of Hussain Sagar to aid in erecting the statue.

While installing the statue in the middle of the lake, it accidently fell into the lake. After a two-year salvage operation, the statue was pulled out of the lake and was installed on the platform successfully in 1992. In 2006, Dalai Lama consecrated the statue after performing a ritual.

Attached to it, Lumbini Park was inaugurated with musical fountains, Bonsai Plants and a boat ride from Lumbini Park to the Buddha Statue. A visit to Buddha statue by boat is a memorable experience.

The best time to visit is evening when the statue is illuminated with colorful lights.