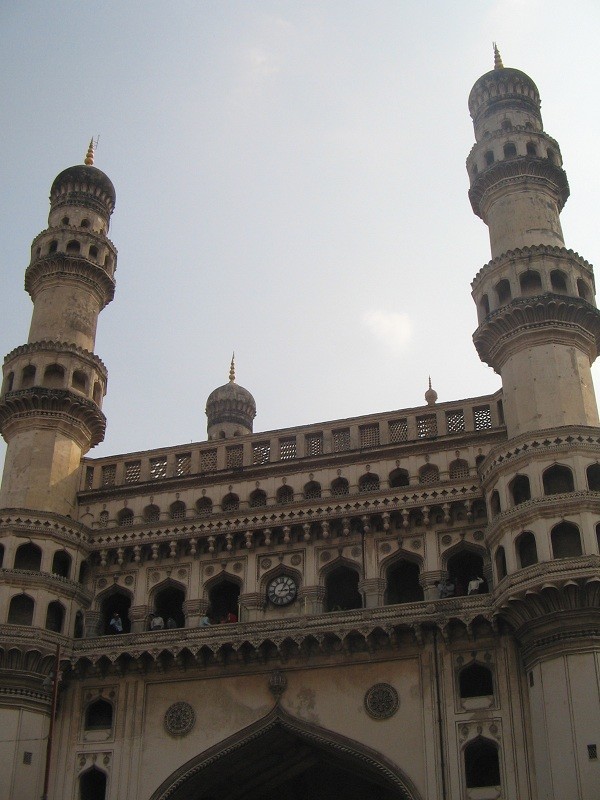 The Charminar was constructed in 1591 by Mohammed Quli Qutub Shah to mark the end of an epidemic of plague in Hyderabad city. Since the construction of the Charminar, the city of Hyderabad has almost become synonymous with the monument. It is located near the bank of the river Musi. Charminar is derived from two distinct words Char and Minar, which means four towers. It is a massive and impressive structure with four minarets.

Charminar is constructed in Indo-Islamic architecture. Marble, limestone, mortar and granite are used in the construction of this grand structure. This is a two-storied building. The balconies on this floor provide a great view of the surrounding areas and the dome of the monument. This is a square structure measuring 31.95 m on each side with imposing arches spanning a distance of 11 m. A row of small vaulted niches ornament each of the four arches. The four minarets are three storied structured rising to a height of 56 m. The spiral staircase inside the minarets has 149 steps leading to the top. The ornamental arches on the minarets add to the aesthetic value. The notable feature of Charminar is the location of a mosque with an open courtyard on the second floor. This is usually closed for general public visit.

The structure is also known for its stucco decorations and arrangement of balustrades and balconies. The floral designs are varied and delicately executed. It was a synthesis of Mughal and Hindu architecture executed by the local artisans. The clocks above each of the four archways were added in 1889. At the base of Charminar was originally a water pond at the center with a small fountain for customary ablutions, before offering prayers in the mosque.

The view from the roof of Charminar is spectacular, although, due to severe overcrowding of the minarets, only visitors with special permission from the Archaeological Survey of India are allowed to go to the top of the minarets. In the evening, with illumination, the great Charminar looks even greater.